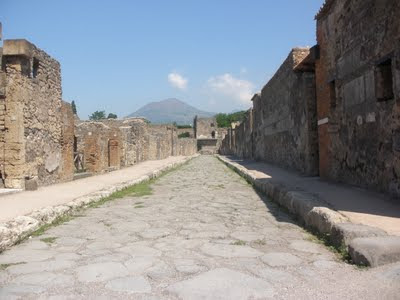 On Friday, we went to Pompeii and Mount Vesuvius.  Since this was the main attraction of the trip, we wanted to spend 4 or 5 hours in Pompeii, and then if we had time, we would take the bus up the mountain where it would be cooler in the hot afternoon sun.  We had a continental breakfast, and walked down the main street to the train station (10-20 minutes).  We were able to catch a train right away, but it must have been late, and / or it was also carrying commuters going to work, because it was crowded, and we had to stand the whole way (20-30 minutes).  Ah, this is why the hotel did not recommend the train as a way to get to Sorrento. 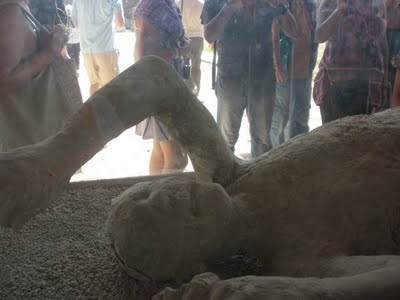 It is a very big place, with very little shade and it was a hot day. We decided to get a guide book, and follow that instead of listening to a tape or using a live guide. We wanted to be able to go at our own pace. There is an option of the 2 hour tour, a 4 hour and a 6 hour tour. We chose the 4 hour, so we could see more than the basic sights. My daughter did a great job of navigating us through the sights, but the signage is based on research, and many of the individual buildings are not labeled, so there was a lot of "well this must be the...". It was helpful to see other tourists go into a building, because then we knew it was one of the more important ones. One of the first things to see is the little museum - the one that showed the forms of the bodies, and we couldn't find it. We wandered around the general area, and wound up exiting the ruins! I swear there was no exit sign. We were heading to the town. When we tried to come back, the security guide wanted to know what we were doing. We told him we had just started, and he told us that the museum was closed for restoration. It is good that we saw him though, because he told us that some of the bodies had been temporarily moved to other places, and he told us where. 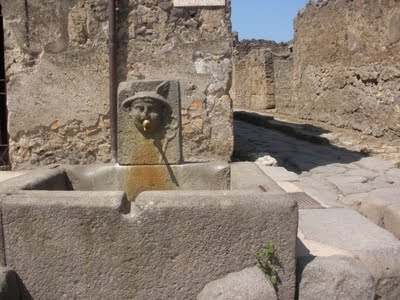 We were able to find and go through most of the other sights pretty easily. The streets were not comfortable to walk on, and my feet were uncomfortable, even though I had purchased good shoes and given them lots of practice. It was a hot day and there is very little shade or greenery in Pompeii. But it does have running water, and we were able to refill our water bottles at this and another fountain. 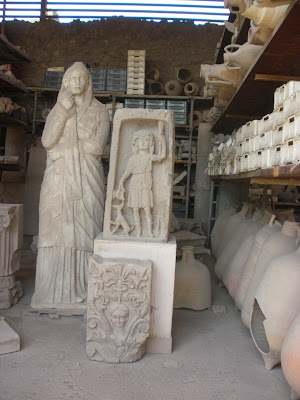 I enjoyed seeing the storage areas where they held more treasures they had uncovered. It is amazing that these things have survived from so long ago, and to imagine the way people lived so very long ago. I couldn't help but think about the last moments for all of these people that lived here. 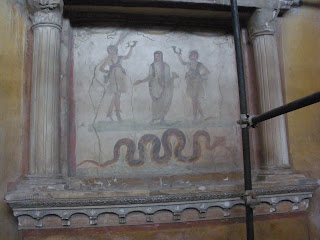 There was another building we were unable to find.  We asked someone who looked like a researcher, and he told us it was closed for restoration.  We decided to sit down to look at our guidebook for the next location, when he asked us if we wanted to see it.  So the two of us got our own private tour.  We had to pay him for his efforts, but it was worth seeing the building. I think these are enough pictures for one post, so I will put the rest of the day in another post.
Posted by Shasta Matova at 2:47 PM

Wow, it's just so amazing. And we don't have to feel the heat or be lost. Awesome to see the pictures on a blog compared to a tv or book...just different somehow!

INCREDIBLE. Was it eerie, knowing what had happened there? I saw a great documentary on Pompeii one time, just riveting.