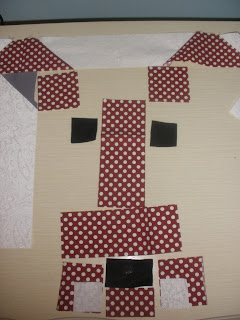 When Wanda suggested using the end of the month as my deadline for the Moldy Cheese and Crackers quilt, I thought that would be fantastic.  I would be done early, and I would get a gold star!  Then I started quilting it and realized why this is a slow quilt.  My wrists hurt if I do a lot of handwork, so I can only do a few minutes a day.  This means I won't get done early and won't get my gold star.  I may not even be able to get the whole thing done by the end of the month. I will be happy if I can at least get the quilting done and the binding machine sewn down.  Then hand sewing the binding down can be done early in February. 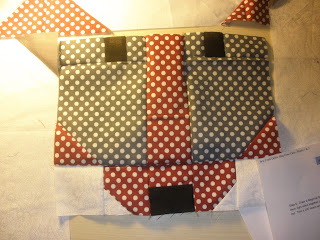 But what this means is that I have quilting time that is not used on the Cheese and Crackers quilt.  Free time in which I can do anything my little heart desires.  So let me tell you about the Dog Gone Cute quilt.  This is a quilt that Lorna from Sew Fresh Quilts offered as a quilt-along. (It's still available if you are interested.) I told myself that since I was still working on Elephant Parade, I should wait to start it.  I printed out the patterns (all of them even though my plan all along has been to just make one dog. 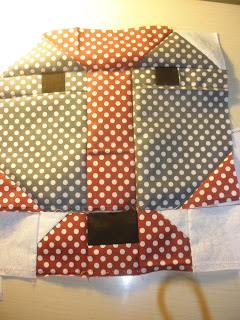 This is a big deal for me, since I don't like to waste paper and ink and especially storage space on patterns, but I really like this quilt.  Then my mother needed a ride to Walmart, and this fat quarter pack just jumped into the cart as we were walking by to get the groceries. Those little puppy dog eyes were just begging to be in a Dog Gone Cute quilt! And now the pattern and the fabric has been united. 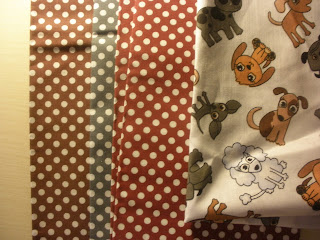 My original plan was to use the two browns -the regular brown as the main part of the face and the reddish brown as the accent.  I considered the gray for the accent, but I decided against it.  I cut the parts of the fabric as I work the steps to make sure I don't use the wrong size shapes and don't lose any pieces.  As I was putting the block together, it was getting darker outside and the two browns were barely distinguishable from each other.  I decided then to use the gray instead of the brown so there would be more contrast. 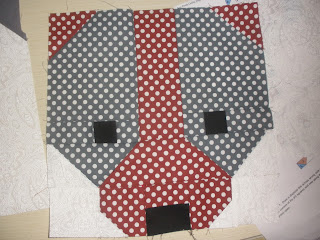 I liked playing with the pieces to see the different animal shapes I could make, as you can see in these pictures. Looks like a bear here.


I adapted the pattern to make his snout a little bit longer.  I have to decide whether to add a border. 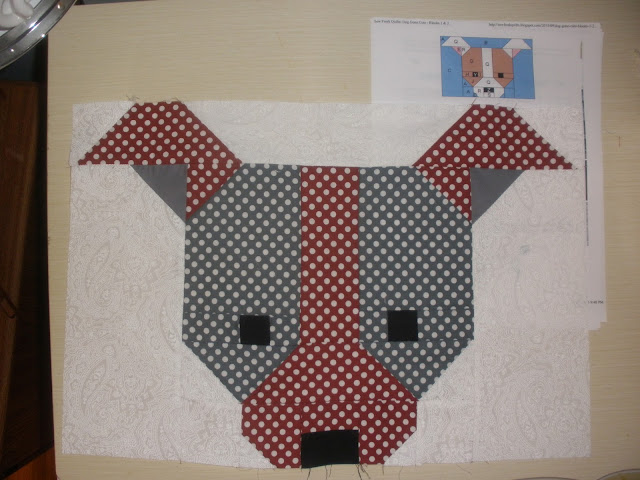 All last year, I wanted to make these one block quilts - the Farm Girl Vintage, the Snapshots, even this Dog Gone Cute. And now I have been able to make one of these.  I just have to quilt and bind it and I will have a start to a new collection!

Linked to:
Linky Tuesday
Posted by Shasta Matova at 7:35 PM

It sounds like a good idea to pace yourself with the handwork. The dog block is cute!

This is a great fabric choice for the dog gone cute pup. He'll (she"ll) make a splendid quilt.

Aren't the Dog Gone Cute blocks such fun. I love that when you lay out all the cut pieces it's recognisable but not a definite dog and how it takes form whilst you are sewing it. I love your polka dot pup!

Very cute dog block! I love that you made it look like a pittie!!!!! My favourite pups...

What a sweet puppy!

Awww! Your puppy certainly turned out cute in all those polka dots, Shasta. I think going with the grey for the face was a good call. Adorable!!!