Here are the circles I made yesterday.  Today is Day 71 but after this batch, I have 53 blocks. I haven't made today's circle(s) yet. They don't take too long to make, so I am not worried about being able to catch up. 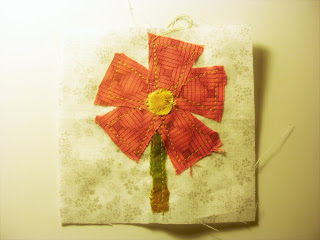 I debated using flowers in the wintertime, but that's when I need them the most! I didn't realize until it was too late that the background fabric is wrong side up. Oh well, Gwen Marston said we could use the other side for variety! 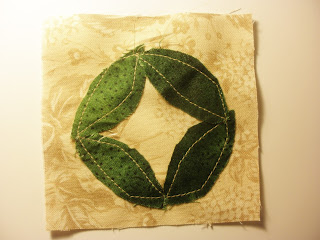 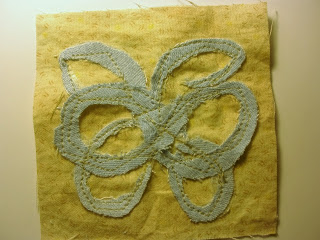 I find that my most creative ones come from scraps so here's another one with the trimmings of the shirt circles I showed you yesterday. Let the quilt police debate whether ovals count as circles. 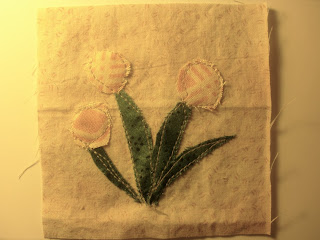 More flowers. Even though there are three circles in this block, it counts as one block. 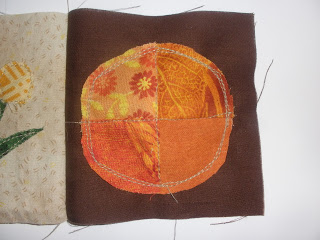 And to keep it from looking too springy, here is one that is more fall-like. It's been a while since I've done a pieced circle.

I have two more circles to make before this row can be joined to the one above it.
Posted by Shasta Matova at 12:18 PM

What an interesting 365 you are doing! I haven't seen anything else like this one, and I must say I love both your flower blocks very much. ~Susan from Stitch-In Days - I haven't figured out how to get Google to take that blog ID on comments. =)

Such a nice variety! I often use the back side of fabrics (sometimes because that's what happens and sometimes because I mean to!) for a change. Your circles are wonderful, each one a little masterpiece of its own.

Somehow I missed that you were back to the circles! These are so much fun! It's so nice to see what you are working on!