The cross hatching of all the background on Cheese and Crackers is finished.  There are 12 feature squares that I am quilting circles on, and six of those are done.  I only do one a day, but since there are more than six days left in the month, I should be able to get the quilting done by then, and maybe even the binding.  We'll see how my wrist holds up.

The daily work on Cheese and Crackers has kept me from doing daily work on Quilty 365 Circles. I have been making a few circles, but have fallen behind.  Today, I will be making more to catch up, so this project can finish in a year.  After all, the closer to the day the circle was due, the more similar the fabric / weather, mood situation. It's no pressure;  I'll make circles until I don't want to make any more.

Let me show you the circles I have made. 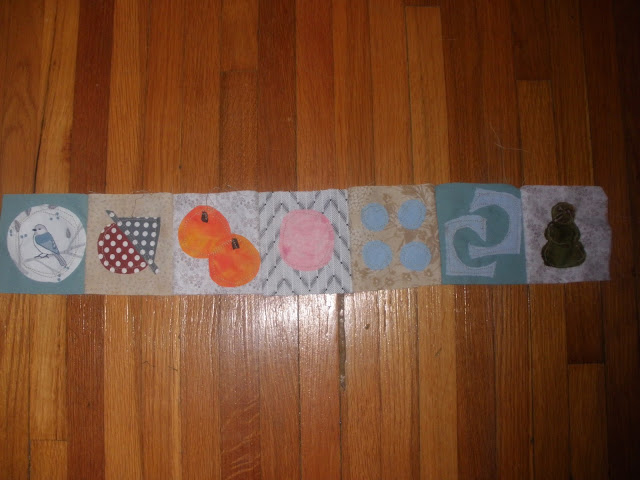 The bird is for our first real snowfall of the winter. I thought the blue reflected the coldness. 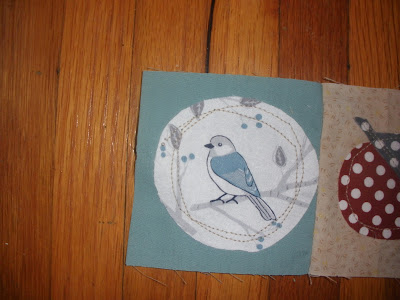 The polka dotted fabrics are leftovers from the Dog Gone Cute quilt. 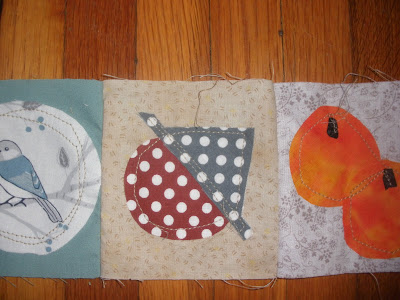 During a walk, I saw two oranges in the snow by a trash can. I liked the contrast between the white and the orange and decided to recreate that.

The pink is just a tiny scrap I found on the sewing room floor and decided it was just the right size to use for a circle. 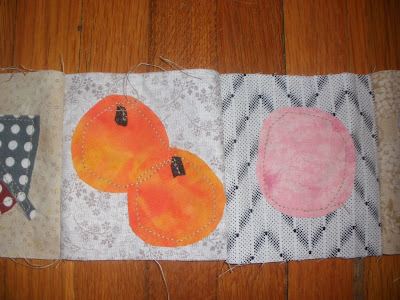 I was given a bunch of blue shirts and am trying to think of a quilt I can make with them.  In the meantime, I made the four circles from one of them.

And while I was at it, I made a leftover of two of the four circles into another block. 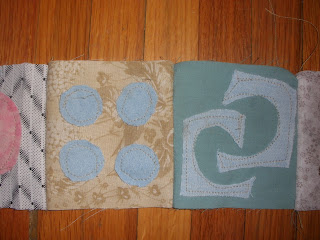 The snowman is leftover fabric from the Winter Scene quilt. We didn't get any snow during the storm but I have friends who did. 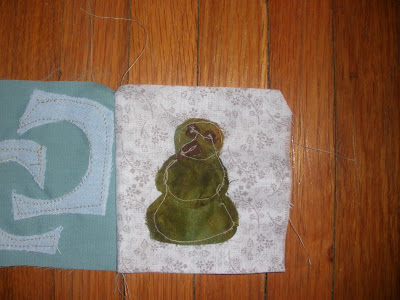 I do have some more circles prepped and will show them after they have been sewn down. To see more circles, just click on Quilty Project 365 in the labels below this post or in the sidebar. Or click the Quilty 365 button to see how other quilters are interpreting this circle a day project.
Posted by Shasta Matova at 1:06 PM

Cute - this is a wonderful quilt!

I love your bird circle! It's really interesting following this, everyone's are so different & personal!

Your variety of reasons for making each circle is as interesting as the circle you make!

I love the bird circle as well and also enjoy reading about each circle. I'm impressed at all the hand work you do.

It's great knowing the story behind the circle! What a fun way you are doing this project. Inspirational work Shasta!