I have a finished quilt to show you!  Awards Banquet.

After I made the triangle blocks and decided to set them on point. I auditioned several fabrics and decided to use red for the setting squares and the center squares.  I pulled out this red which feels more city and made the quilt more elegant than the improv origins would show. I added it despite the fact that the red fabric felt more city-like as compared to the black and white chickens which felt more country.  We are allowed to have chickens in the city.

When it came time to choose a border, I was a little bit conflicted. I wanted to use up the black and white fabric I had, but I read the words as 2000 at first glance.  If I wasn't willing to use 2000 fabric in 2014, when was I going to?  So I decided to use it.  As I cut it up, I realized that it didn't say 2000 at all. It said "moo" and there were cows on it. How could I have missed them? My favorite fancy red fabric was going into a quilt with chickens and cows on it. I don't think we are allowed to keep cows in the city. Most of my black and white fabric came from a fat quarter swap. 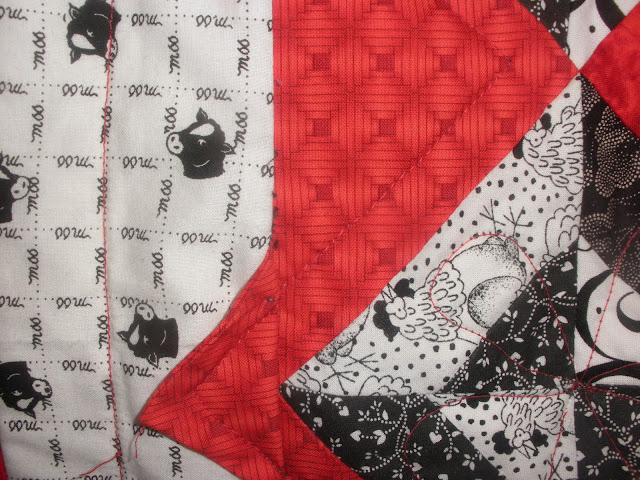 My realization came at just about the time I received an invitation to attend an awards banquet.  It is an annual banquet to thank the employees for the hard work they have done during the year.  Usually when I am invited to this banquet, I am asked whether I want beef or chicken.  I didn't get to choose that year, because the person inviting me chose for me. It's probably because he didn't think to ask me until it was too late and had to make a choice right away, but I will believe that it is because he loves me and wants me to eat healthier that he chooses chicken. 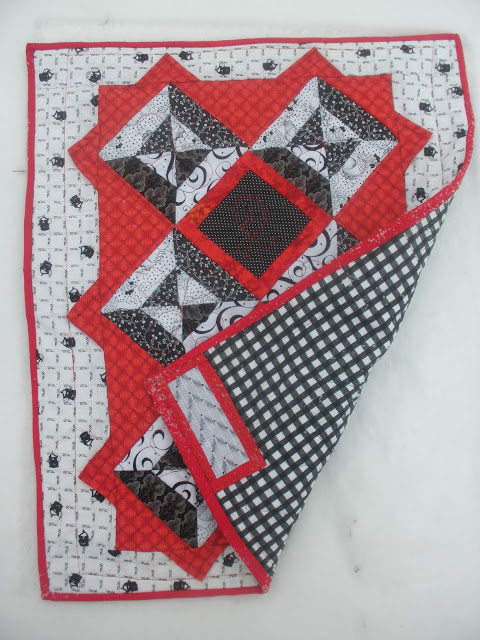 Anyway, these two things mixed in my head and this quilt became to be known as Awards Banquet. After all, the name "Leftovers Quilt" has already been taken, and this quilt is far too nice to be a leftover.

I cut the setting triangles the wrong size, and instead of scrapping them, I turned them into three-dimensional prairie points in the border. I really like how they extend the setting triangles make the top float.  I was going to leave them loose, but it was easier to quilt them down. I free motion quilted awards ribbons in the center squares to fit the name. #1 of course.

This is a small quilt measuring 19 1/2" X 24". It was started in April 2014 and finished today.  It snowed yesterday, so I rushed to finish it today while there was still daylight outside.  I was able to photograph it outside in the snow. Even though it isn't an unusual design, it is my own design. It is my first Finish for 2016. 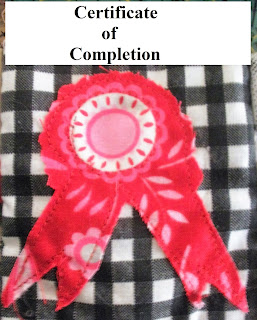 For finishing, I received this Certificate of Completion. But no beef or chicken, unfortunately, as I am trying to eat vegetarian, and I don't have either of those in the house.

Linked to:
Let's be Social #107.
Needle and Thread Thursday
Posted by Shasta Matova at 5:36 PM

That Award Banquet quilt turned out pretty amazing for having chickens and cows on it. Too cute and a great job! Congrats on a first finish for 2016!

There is plenty of time to finish another one this month..........right?

I like your choice of red to go with the black and white and the urban/country mix. You are very good at using up your leftovers.

What a wonderfully graphic little quilt. Congrats! on finishing it.

Moo!
(I've got a bunch of cow fabric, too - I used some in Allietare, and have been using it in other things now that I've gotten it out.) I love the cows and chickens in your Awards Banquet. 8)

Happy finishes! Good for you.

Cluck Cluck MOOOOO -- what a fun quilt and thank you for sharing its story.