Since I had such a good time quilting my last quilt, I decided to go on and quilt another one. Here's my finished red and white presents quilt. The lighting isn't good in the fall/winter, but at least you can tell that it is finished. 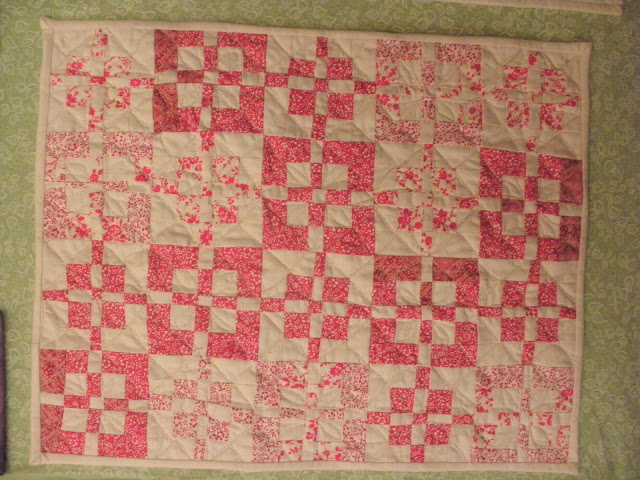 Unfortunately this one was not fun to quilt.  I used free motion quilting, and my biggest mistake was not planning a continuous line.  I knew I wanted to do loops in the inside squares, and a bigger loop in the long rectangles, but my plan for the remaining sashing involved traveling back along existing lines, and there really wasn't a good flow from one space to the next. 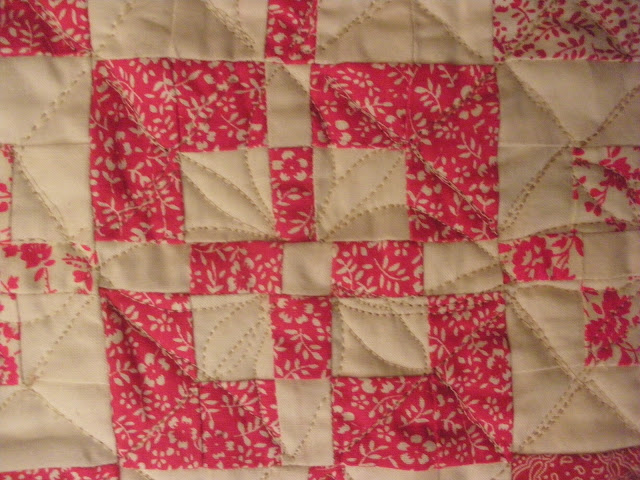 (I obviously wasn't trying to match points on this quilt. The center square is half an inch finished.)

There were other issues too. I kept running out of bobbin.  There is some kind of problem with the machine, and the bobbin fills only about half way.  I have a separate bobbin winder and my two broken machines upstairs have bobbin winders that work just fine, so I don't have any excuse for not using one of those, but I didn't think a small quilt like this would need that kind of effort.  Then I ran out of spool thread too.

I also had other interruptions - some perfectly normal family type stuff, and some bots who are worried about the interest rates on my credit cards.  When I was working on the tile quilt, after an interruption, I would come back and say "now where was I?" and resume quilting. With this quilt, the interruption would lead me to say "let me turn this machine off and do . . . " something else.

These interruption meant I wasn't able to establish a good rhythm flow to the quilting, and the path changed from one session to the next. I don't think any of that is obvious in the finished quilt though. 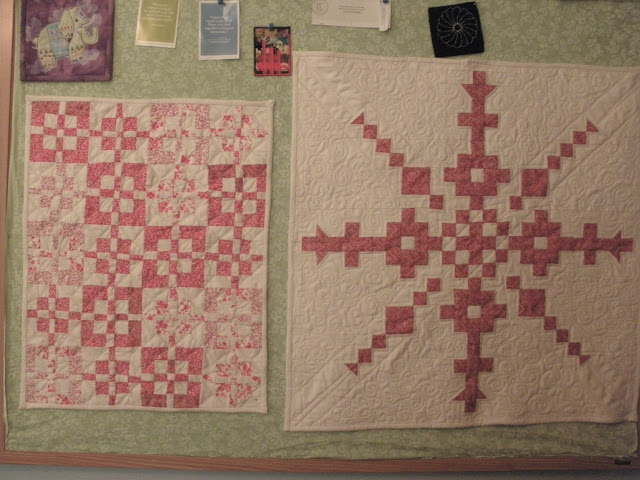 Here it is, a second generation quilt next to its parent.
Posted by Shasta Matova at 7:42 PM

Congratulations on fighting through the hiccups and interruptions and finishing this. I like this a lot and it's cool to see it next to its parent.

Love your two quilts! Very different but both striking!

Boy, I've been missing out by not stopping by! Fabulous projects.