When I was making the Pointless Puddle, I had the quote from Whose Line is it Anyway? "Where everything's made up and the points don't matter"stuck in my head.

Now, as I am making progress on Ringo Lake, I have another quote stuck in my head. Way back in elementary school, I learned this song. My hat is has three corners, three corners has my hat. And had it not three corners, it would not be my hat.


Now it's been adapted to: My quilt it has four corners
Four corners has my quilt
And had it not four corners, it would not be my quilt. 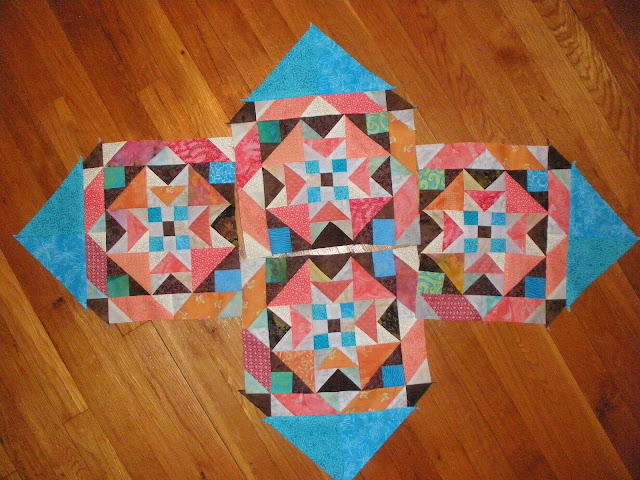 It's almost a complete quilt! It just needs a set of sashing and some corner blocks!

Just kidding.  I've decided that I am going to make the quilt the same size as Bonnie's. I was originally trying to decide whether I needed to make it one row smaller to fit my bed.

Having two rows done in each block makes me think I am about 2/3s done, but really it is closer to half since I don't have many sashings done, and haven't joined the blocks yet, and don't have many corner triangles. Okay it may be less than half but that is pretty good progress for this quilt with thousands of pieces in it.
Posted by Shasta Matova at 3:00 PM

I am LOVING this - the colors make my heart go pitter-patter!!!

It's looking lovely. Isn't it funny how a song can sidle into your brain and stick there?

Beautiful interpretation of the project. Bravo!