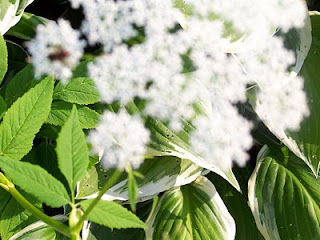 The queen anne's lace looks pretty, but it is really a weed, and it doesn't photograph well.


I told you a couple of posts ago, that I was content. That's because I didn't know what was going on around me. Besides the pending "showers and thunderstorms" there was a conversation that was pending because we were playing phone tag. I had not forgotten to push the start button on the dryer. It wasn't my fault, it was the dryer's.

My attempts at spring cleaning (which technically started in January) keep getting waylaid - by back problems, allergies, phone calls from talkative people, authorized overtime. This weekend (Saturday night and Sunday anyway, since I worked Saturday day), I thought I would get a chance to catch up but I got a long phone call, which took away the little time I had on Saturday, and then a short phone call which invited me to a family gathering, which took away most of the time on Sunday.

Then to top it off, this morning, I tried to rant, but blogger was down.

I am glad I didn't know all this stuff, because at least I had some time I could be content, even it it was an illusion.
Posted by Shasta Matova at 5:53 PM

I love Queen Anne's Lace...which always makes me think of lots of French Knots. Hope you are having better weather!