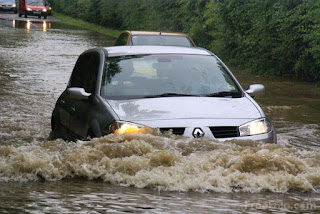 And generally sometime during the day it rains a little bit, but for the most part, I miss it, because I am either asleep or at work working.

Whoever made up that saying about April showers bringing May flowers is very wrong. I know this, but I have to learn it anew every year. Maybe once in my life, it must have rained in April.

This morning though, when I got up at o'dark thirty, there was no weather announcement. Since sane people generally like to sleep in on a Saturday morning. Not that it would have mattered, because I have been hearing the same thing for five weeks. But when I went outside, it was clear that something is about to happen.

It was fine for the first 1/4 part of the of the trip. The second fourth, it started to rain a little bit. The third fourth, though, it came down hard, and my wipers were in full blast so I could see enough to get by. I had to rely a lot on my memory of the road, because it was very hard to see. Then it happened. The last fourth is in a busier part of town, and there were many other cars on the road to look out for. And, there's more! There was flash flooding. Don't be fooled by the picture.

Not only could I not see the road because the rain was coming down so hard and my wipers were going crazy, there wasn't really a road to see. I was driving through water. I guess it was time to figure out if my car knows how to swim. There were three of those sections. I guess the car did okay, but the weather forecaster slept through the whole thing.

Of course as soon as I got into the parking lot, the rain slowed down considerably. And of course, the other people in the office were smart enough to sleep in and completely miss the storm.
Posted by Shasta Matova at 3:41 PM

I have driven my kids to school on horrible rainy days. And when it is also windy, that's scary! Can't see much & I can feel the car veering - I dread to think we will go off the highway & into the river! So I don't do that anymore & they take the school bus which is more sturdy than my car.
Stay safe & stay dry! Have a good week!