We had heard lots of things about Napoli.  That there was a lot of crime there - especially pickpockets.  On the plane from Venice to Naples, I met an Italian student who went to school in Naples, and returning from his visit with his parents who lived in Venice.  He said to be careful.  The guidebooks say don't stay in Naples, and hold on to your belongings very carefully.  The other tourists in Sorrento said, "What, you're going to Naples?" like we were out of our minds. Poor people live in Naples.

We live in a city, and people may even say things like that about our neighborhood, so we were not afraid.  We took the proper precautions - limit how much money we were carrying, and left the purse in the hotel.  I was worried about having to stand on the train for an hour, but the train wasn't too crowded, and we were able to sit.  We were able to give some pointers to some tourists who were going to Pompeii, and received some advice about going to Amalfi. 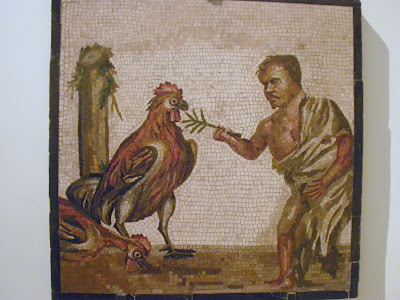 There is an information booth in the train station at Naples.  The lady was very unfriendly.  She expected us to have a map (but she didn't sell any), before she could provide information.  She did not even have her own map to show the way.  We went and got a map, and went back to the info booth.  Luckily, there was another person at the counter the second time, and he was able to give us good directions.  We took a local train to the museum. A nice train rider showed us the way out of the train station and to the museum.

The museum was very nice, it had a lot of marble statues, an Egyptian exhibition, Italian paintings, and of course, treasures from Pompeii and the other towns devastated by the volcano.  I'm afraid I wasn't a very good companion to my daughter, because my feet were still itching and hurting.  The shoes and athletic socks I had brought were very comfortable, but were not breathable. Also, I had forgotten to recharge my camera battery so I couldn't take any pictures.  I wound up looking at the exhibits from the benches most of the time.

I even convinced my daughter to go through the Secret Room, just so she could say that she had seen it. 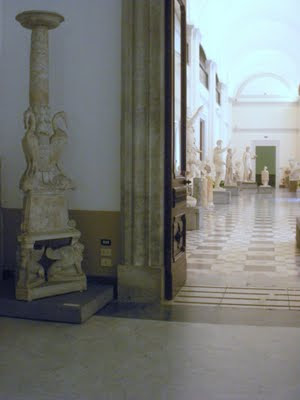 After taking our time looking at all of the exhibits, we had Napoli pizza in Naples.  It was very good, and at better prices than the ones in Sorrento.  Unfortunately, going through a museum doesn't make you very hungry, so each of us only ate half of our individual pizzas, and the chef was disappointed.  And since we were not done sight seeing, we couldn't take it with us.

We then went to see Naples Underground.  While we were waiting, I took off my socks, which helped a little bit with my feet.  The city is built upwards.  Instead of tearing down the ruins and starting over, most people just built a new layer on top of the old one.  The archeologists discovered remains of the old buildings underneath the current ones. We went underneath several buildings to see streets, a theater, and an aquaduct. It was nice and cool underground, and the tour guide was very personable.


We walked to the train station, stopping at some shops and street vendors along the way. The train ride was fine, and we walked from the train to the hotel, stopping at the little streets in Sorrento along the main walk for a restaurant.
Posted by Shasta Matova at 2:53 PM

I'm sorry you were still having trouble with your feet - looks like a lot of fun! Good for you on going on your own, I would much rather do that than a tour.

sorry to hear about your sore feet - no fun!
sounds like you are visiting amazing sights. Wow, you really planned a wonderful trip!