That's a much better title than just circles and rails, isn't it, even though this is just another post showing another circle and more rail fence blocks. 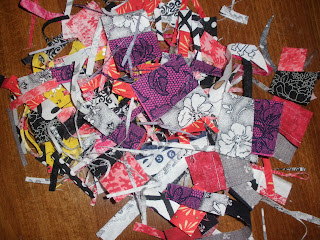 First, I will show you my trash.  These are selvages and other trash that is made during the quilt making process. Everything is less than an inch.  I just hate throwing it away, but gosh, I won't have any room in my house if I save everything, including the last little snippet.  I have been forcing myself to throw away the snippets, but this time I decided to use these snippets to make my circle, and then I would be able to throw away the leftovers. 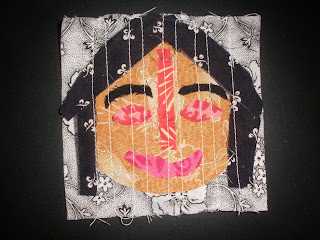 At first, I was going to use the snippets in the shapes that they were, but I decided that I would be allowed to trim them to shapes that I wanted. I secured the pieces with a glue stick and then sewed it all down with straight lines instead of going around each piece individually. I see now I could have used white for the eyes instead of pink and given her some eyeballs. Except for the background square and circle, everything else is from the trash pile.  Instead of making it easier, this just made it more difficult to throw away the trash. 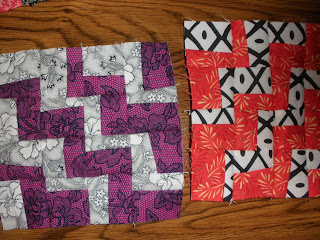 These two blocks are my latest additions to the rail fence quilt.  I really like these because they serve as a bridge between the fabrics that are already in the quilt.  The one on the left helps show that the pink and the purple do go together, and the one on the right show that the pink and the orange do go together.I really didn't want to reject the orange fabric.  It's like having a friend, and then discarding her because your new friends are prettier. And she really is pretty too. 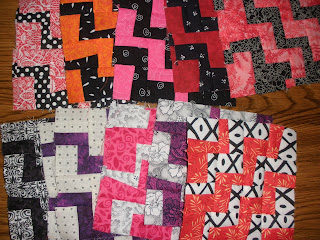 Here they are all together. At this point, I think I have enough blocks, but I really like making these, so I am going to add some more. I will add some more orange, and there is some more purple fabric I would really like to add.  I think I should also add a red so it doesn't look like the odd ball.

I also wanted to tell you about my new project. You probably don't remember my photo scanning project, but it is way back about when I started this blog.  Basically the rule was to scan at least one set of  pictures every day, but more is better.  I managed to get all of them scanned that way.  Well my new project has to do with quilt magazines.  I have a whole bunch of them going way back in time since I haven't ever thrown any away.  My plan is to get rid of all of them. It will make space and reduce clutter in my house, and give the dust mites fewer homes to live in.

The plan is that I will go through the quilt magazines and scan whatever patterns I want and give away the magazine. I am not allowed to keep any paper. This keeps me from taking the lazy out of just ripping out the patterns I want, and still keeping a mess. If you want any, let me know - they aren't in any particular order so it will be hard for me to find a particular issue, but they are all quilt magazines.  Right now my plan is to give them away to a local charity.

Love the idea of scanning patterns.

Shasta, I've always thought pink and orange looked great together... just look at pink coneflowers with their dark orange cones.
What a fun experiment to try using your trash... you made me laugh with your "Instead of making it easier, this just made it more difficult to throw away the trash." That would happen to me too. Have you ever seen confetti quilts, where you chop up your colors and then use them like paint almost? Your face quilt is fun!
I've been thinking about doing the same thing with my magazines. It's a great way to cut down on how much you are storing, plus you can separate the patterns and ideas into categories and keep different files. Much easier to find what you have in mind that way.

Oh your "face" circle is so cute--what an inspired idea--maybe facial expressions reflecting your mood?? From angry to calm?? How neat to use up those itsey-bitsey pieces--hugs, Julierose

I too scan the documentation for each quilt I make (notes kept along the way) AND any patterns, etc. that I find. SO easy to scroll through that folder when I need something and I love NOT having the stacks of magazines/notebooks on my shelves (more room for fabric - Yes!)

I've been scanning things too - very liberating to get rid of the paper. Guess the secret is being able to find things again though... Please share how you organize things - even your "mistakes' will help others reading to perhaps not repeat them when they do it.

These rail fences you are doing are fabulous - and the circles are amazing!

Well, I'm off to cut vegetables up for Thanksgiving food. I'll blog the results of our testing...

These blocks are a lot of fun and have so much energy and movement.

You're so right. I used to throw these little bits away but as I find more ways to incorporate them, it's just more difficult to toss the trash. What a clever face. I love her nose and eyebrows.
Your rail fences look so wonderful; the black and white rails both set them off. Keep going.
My family just finished scanning all our photos - a multiyear job. I've scanned most of the "interesting" articles I kept in folders. You remind me to finish that off. I sure hope there aren't electronic mites!
Thanks for linking up with AHIQ.

I like the combination of black and white with bright colours in your rail fence blocks; like Lara I have always thought pink and orange went together, and they certainly look good here. Your face circle is a very cool way to use tiny scraps - though I'm pretty sure I didn't need encouragement to keep the little bits! Thanks for sharing this on the AHIQ link up.

Hi Shasta! This is interesting project! All the blocks look great and I love the face! x Teje

Little Miss Snippet is darling! What a clever use of scraps!

Well, I LOVE your rail fence blocks! I've seen umpteen versions of this quilt, but this is the first time I've noticed one where the stripes gradually change in thickness like this. More food for thought!

Well, in my world ALL colors go together, but I appreciate the reminders all the same, 'specially when they are illustrated with photos proving the point! I like the circle, and I really like your rail fence collection, it will be awesome all together.

Let's see...there's so much here to respond to, and I'm such a talker! Okay, I have opinions! First, if I really want to eliminate the bits, I have to toss them as I create them--on the floor and walk on them (not on purpose or anything, just normal walking) in which case they get dusty and when I sweep they go. I don't even mind by that time. Second, that face is too cute and if I made one, I'd never toss anything. Lastly, those rail fence blocks! Love 'em. Yes, love them. Of course, the more you make, the more they blend, so have all the fun you want.

What a great idea for using up a few of those scraps..... Such a cute face block. Love seeing your progress on those rail blocks and can't wait to see them all sewn up together!