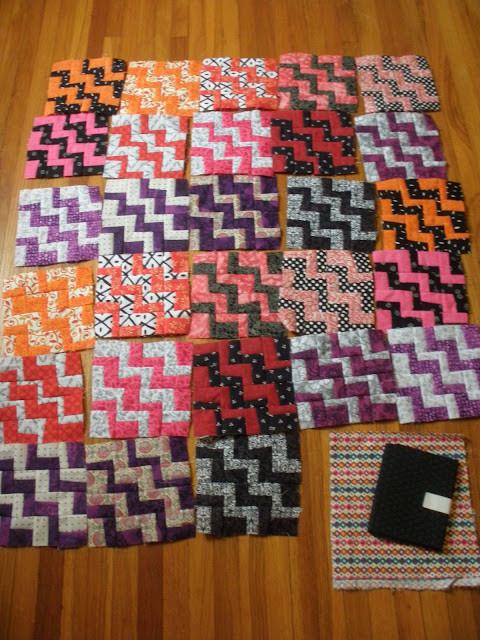 Here is the layout that is similar to the cover of Cultural Fusion. All of these are trying to figure out the orientation of the blocks.  Once I decide on the orientation, I will work on block placement - I will decide which blocks go where later.

When I went to test the layout of my rail fence quilt, I realized that I did not have enough blocks.  I had read a couple of blogs where people said they did not have enough contrast in their quilt because it was missing a contrasting color - a blue or a green in my case.  I thought adding a whole block in one of those colors would be glaring, but I found this fabric that is mostly warm colors and has green in it. I wasn't sure it would work, but I made the blocks to see how they would look. 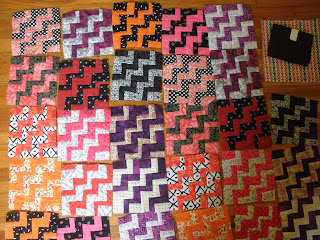 Here's the same layout, pictured from a different angle.  I would prefer my steps to go up instead of down. I don't know why - maybe it is because of my accounting background and I am thinking of graphs, and they are usually better when they go up. Higher profits! higher revenue! higher productivity! 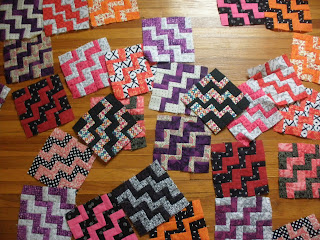 Here's Zeus's suggestion for a layout. On top in the middle are the new blocks. I think they blend in okay. 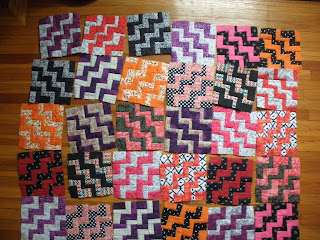 Here's a random pattern. Just seeing if random is good. 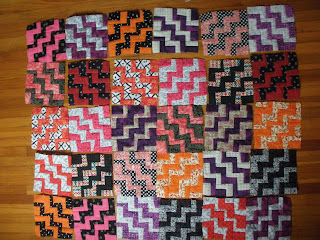 This is the zigzag layout in the book. I'm not sure how helpful this one is to see, since I made several mistakes in orientation in this one. Actually, I'm sure I made mistakes on all of them.  I found it pretty difficult to work out which way the blocks were supposed to be oriented. 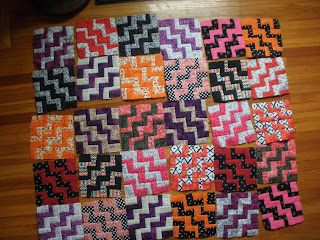 This is the square steps layout in the book.  Generally, when I saw other people show their layouts, I liked this one the best, because it looks like the multiple trip around the world quilt that is on my to-do list, but I'm not so sure it works well for these blocks.

So what do you think? Do all these blocks work well together? Is the red and black one too dark? What layout do you like?

Posted by Shasta Matova at 7:05 PM

So many possibilities. I'm overwhelmed. I think I like the steps going up to the right. I like all the blocks wouldn't take any out.

I don't mind the red/black blocks but I think I would want 3 instead of 2 for balance. I love the allover color combination of the quilt.

Great choice of colors and fabrics!

I agree with Wanda's 3 instead of 2 comment. The truly great thing about this quilt is that scrappier really is better and the layout allows for lots of variation while still "reading" well. I tend to like the single direction layouts better than the bullseye or multiple trips versions (meaning your graphic up and to the right suits me just fine).