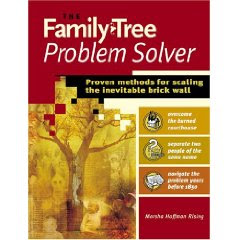 Sometimes I get pulled away from quilting by genealogy, and it has happened again lately.

Before you skip this post, I should tell you that footnote.com has their 1930 U.S. census available for free for the whole month of August. Even if you aren't interested in studying genealogy, you might want to see where your parents and grandparents were living in 1930. It will tell you if they owned a radio, if they owned or rented their home, who they were living with, their occupations, their place of birth, their parents place of birth, their neighbors, etc.

I read a couple of books. I'm reading the book pictured. Also a book by Vicki Dell Tieche called 16-3-3. There is no picture available on the internet, and I returned it so I can't photograph it for you. It is the story of the settling of some new land in Delaware County, Ohio. She took the historical information and created a fictional story. I really liked the way it made the history come alive, and showed some of the hardships a family had to face in settling a new frontier. I liked that she used real people instead of making up her own. The details about whether the settler took one road or another road or which direction he went were fine fictionalized. The fact that he didn't tell his wife that he was going bothered me, but I guess that fits into the time frame that he might not have, although if I had written the story, since she mended a cloak for him for his journey, I would have said it was her idea!

The details about the first white burial in the county bothered me a little bit because reading the end notes shows that she knew nothing more than the fact that Mr. Harris was the first burial. The history books don't tell you who Mr. Harris was.

The thing that bothered me the most was the story she built around the fact that one couple only had one child. She said it was because the wife withheld affection, and that he had to resort to going to town for his needs. I think if I was related to this family, that might bother me, even knowing that this is a fictionalized story. There are so many other explanations for this situation. And as a story writer, I think the best thing to do would have been to have the main couple speculate on the reason, but not have provided the answer.

P.S. Patrick Lose responded to my last post and he has a blog!
Posted by Shasta Matova at 8:06 AM

I don't know if I could handle anymore suprises from my family history, lol - but I do know where they were living at the time. I had an uncle that did a LOT of research.
I enjoy historical fiction too, but murder mysteries are a particular favorite. They make my husband nervous. *giggle*
Patrick Lose has a blog! Oh my!!!!!

Genealogy sometimes distracts me too. Every few months I run my names on various sites & if something new pops up I'm off and running. LOL

Thanks for the tip on the census data. My Mom has most of our family done but it is alway open to some more data.

Have fun with the Patrick Lose book...I love his work!