The Great Scanfest has Begun! 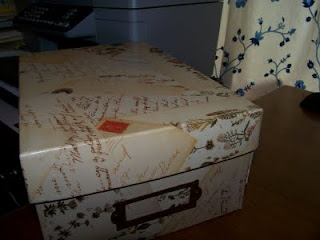 Every time there is a birthday in our family, my sister and I talk about creating a slide show for that individual. It is really fun to arrange the photos, and choose the special music, and select the theme that would really show the birthday boy or girl how much s/he means to us. We did one slide show for our mother, and she really enjoyed it. We managed to get her to laugh and to cry in one five minute presentation.

The problem with creating the slide show, is that a lot of our pictures are in photo format. And it just doesn't seem right to have a birthday slide show that features just the last few years. Both of us - my sister and I - take a lot of pictures - although she would win any contest hands down, and we have boxes of photos. - (my daughter and brother-in-law also get in on the act from time to time; there is a picture of a sock in the batch of pictures with this box.) I started out with albums, but with the magnetic pages deteriorating the photos, I wound up with boxes. I have purchased albums, but I think the boxes work just fine, and digitizing the photos will make them more accessible if we tag them properly.

I mentioned the idea of scanning the photos to my daughter, and she jumped on the idea. I think it is her way of getting copies of all of my photos. She is scanning everything - even the blurry ones, and the unimportant ones (really do we need copies of all of the animals we saw at the zoo?) Whenever I ask her to do anything for me, esp anything that involves cleaning, she reminds me that she is going to scan pictures for me.

My mother doesn't understand why we want to scan pictures when we already have the prints. I do see the logic of that, but someday we might even make prints of pictures we only have digitally. 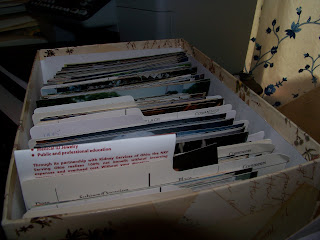 My daughter was explaining the process to her friend, who mentioned that there were a lot of pictures in the box. Daughter told friend that there were four other boxes where this one came from. I decided it wouldn't hurt her to think four, when the actual number is almost double that. That paper that is sticking up, that is the marker that shows how far she's gone.
Posted by Shasta Matova at 12:27 PM

This is SUCH a good idea. I too have boxes and boxes of photos - and in case of fire, it would be good to have a back-up off site.

Had to laugh that your dd would use the scanning excuse to get out of cleaning...lol!

I've thought about scanning old photos too and maybe giving myself some shelf space. But I guess I couldn't throw out pictures anyway. Isn't the modern world wonderful though that we can even do these things. It is very nice that your daughter will be so helpful!