Here's another batch of circles for the Quilty 365 Circle project. Mine is currently named The Rule Breaking Quilt. 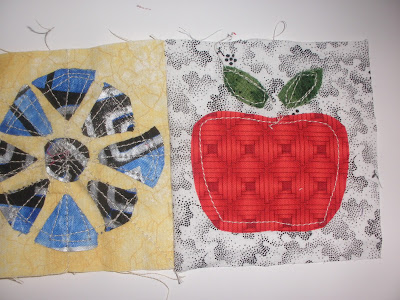 I already showed you Circle 78 which is on the left. It uses leftovers from the Adrinka quilt.
Circle 79 is on the right. An apple is not quite round, but I thought it was close enough. It was a scrap of fabric I picked up to trim and decided to turn into a circle instead. 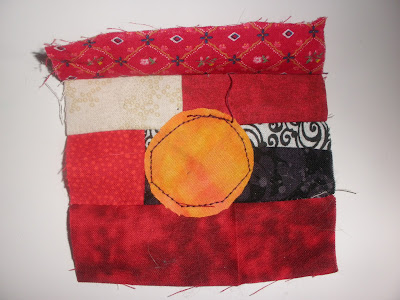 I used a pieced background because I wanted something different that didn't look I made these batches at a time.  I was piecing it as a leader and ender while quilting the leftover rails quilt, which meant that this one finished before the other ones that were being prepped. I think I am going to choose the arrangement in the quilt for this batch, but I have to number them to show you. 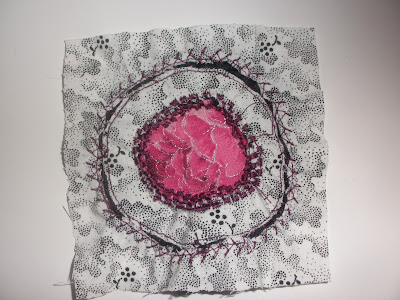 PBS (Create TV) had a six hour marathon where they showed quilting shows. My allergies were really bad, so I couldn't do much work but it did give me a good excuse to watch all of them.

I'm pretty sure that all the shows were reruns but since I don't get up at 6am to watch tv, I had only seen a couple of them which had aired at more reasonable times.  It was nice to put faces and personalities to some of the names I had seen on the internet.

One of the techniques they presented on Quilting Arts was layering the fabrics, sewing circles, and cutting the layers.  Then using machine embroidery to embellish.

Here is me butchering this technique. I put the layers in an incorrect order(I think the background goes in the back  not the front)  and cut the black line way too skinny so it is hard to see, but I like the way it looks here. 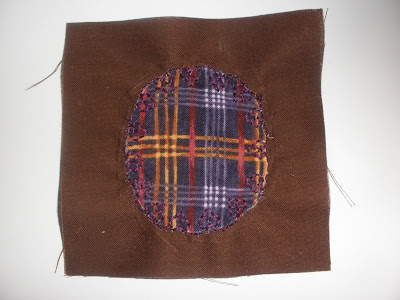 The reason my dining table is not rid of scraps that need to be trimmed for scrap vortex is that I keep bringing more downstairs.  This is one I brought downstairs. I want to keep making plain circles because that is absolutely allowed and I don't want people to forget that. I like that this one is dark and sedate. I used embroidery stitches around it which you can't see very well in the picture, but it will be a nice reward for people who bother to take the time to look at the individual circles. 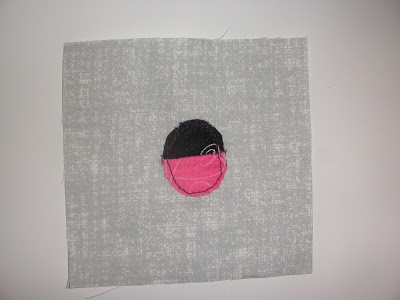 Another do, using a small scrap from the railfence quilt.  This one makes me hungry for All Sorts candy. 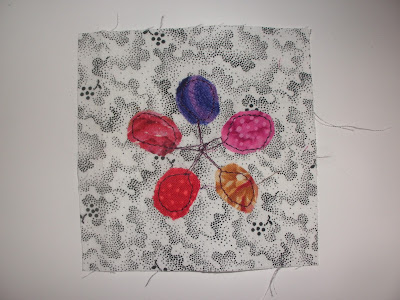 One of the scraps I brought downstairs was a bag of leftovers from the Daisies Do Tell quilt. (That quilt is sandwiched and holding my safety pins for ransom.)  The scraps are very tiny, and only some of them have fusible on the back of them.  I had the fusible out anyway as I am tracing the blocks for the 1857 quilt, so it was an easy decision to make these. 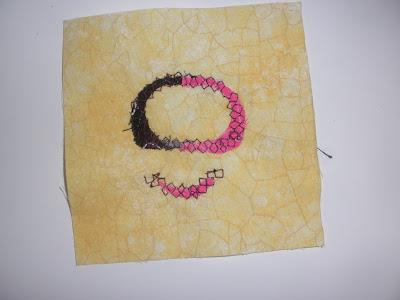 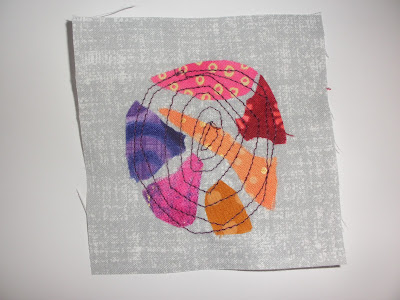 These are more leftovers from the Daisies Do Tell.  I wanted to make a circle out of shapes that were not circular. 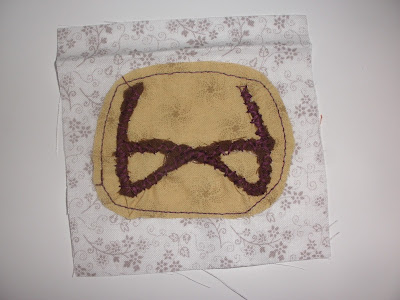 The glasses were supposed to be the circular part, but they didn't turn out as circular as I wanted, and the background fabric wasn't flat enough to use so I cut it out and appliqued it on a new background. This one one represents my new pair of glasses, although they don't look like that. 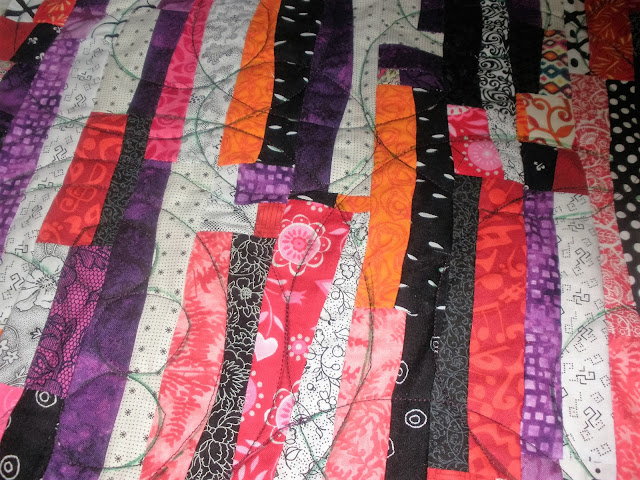 I have also quilted circles on my leftover rail fence quilt.  I used a green washable marker to draw the circles and am hoping that it washes out.  Poor Zeus was so confused when I brought out different sizes of  plates but no food!  Yesterday with my allergies, I chose a sedate green for the binding, but today I cut out a bright orange. I want to hurry and bind it so I can get it washed before the marker becomes permanent.

Great circles - my favorite is the apple - or maybe the glasses! Love your quilting on the rail fence. Don't use detergent when you wash it - some of those markers can become permanent if you do.

I really love how inventive you're getting with these circle blocks! Love the apple, glasses, and the plain one because of your explanation for it!

Great progress! Such fun to read the back stories...

Great fun and love your breaking all the rules!!!!

Your circles are awesome ... simply awesome.

Great circles! Love that your working outside the box.