Here are another 7 circles for my Quilty 365 circle quilt, where I supposed to make a circle a day. 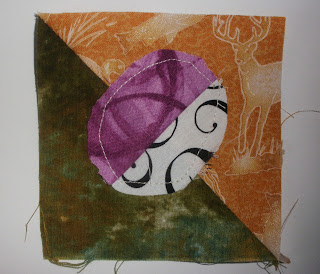 Last week, I made an HST block as a background.  Due to my method of making them, I made 2 at the same time.  I used one of them last week.  When it came to this week though, I started thinking about my rules for this quilt. Am I allowed to use the same exact background for more than one block? It actually took me a while to think about it.  It finally occurred to me that I had been repeating backgrounds all along, so why not the same pieced background?  I've also repeated fabric for the circles so I am not sure why I had to worry about the rules for this one.

When it came to deciding what circle to put on it, I found this pieced scrap I had recently cut from the rail fence quilt, which I will show you tomorrow.  I wanted to use it up so I did. This is
Block 67, not 66, because I finished it after the one I am showing you next. I wanted to tell its story first so you knew my mindset this week. 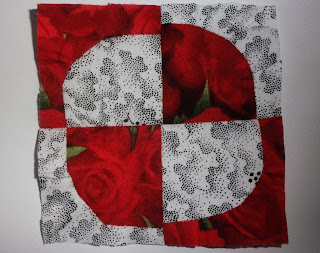 Block 66: I saw this layout for a drunkard's path block on another blog and decided to add it to this quilt. This is a tiny block which needs precision piecing.  I often go back and forth between precision piecing and improv, though not usually very successfully.  This is a tiny block - cut 4 inches so each quadrant had to be correspondingly small.

There was a tiny gather in one of the pieces and instead of fixing it, I decided to make more!  Who said the background had to be flat? I'm all about breaking rules.  Once I trimmed this block to the proper size, the gathers, which are in the light fabric, are not very noticeable. 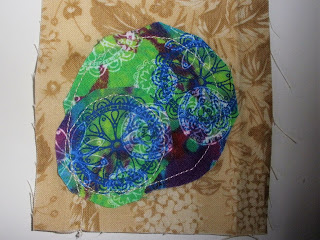 Block 68: This fabric was the backing of the Elephant improv quilt, and was looking messy as it had a batting scrap attached to it.  I cut away the batting, and used up the fabric.  I didn't realize until I put it with the previous row how close it is to the block in which I already used this fabric. 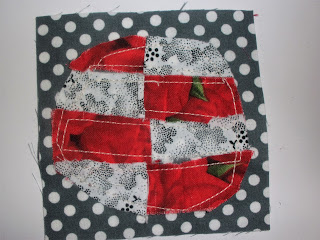 Block 69:  This is leftovers of block 66. There were four pieces with the red and white strips pieced together.  Instead of piecing the four strips, I appliqued them onto the background. The vertical lines are pieced, the horizontal lines are appliqued. 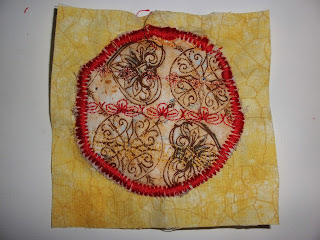 Block 70: I showed this one to you yesterday.  It is a quilt sandwich with lines of embroidery stitches going through it. I satin stitched it to the background. 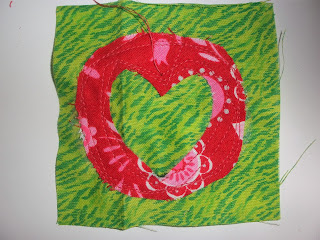 Block 71: During a walk near an elementary school, I saw a pink disk on the ground. It had a heart cut into it.  Was it an eraser, or some plastic disk?  It was flat and I thought it would make a perfect addition to the quilt, much like the found button I used earlier in the project. As I was about to pick it up, Zeus marked it, and I decided that maybe a fabric reproduction would be better. 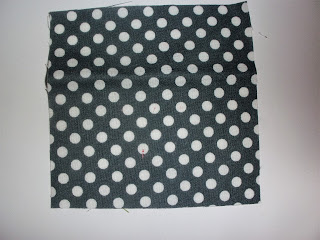 Block 72: I finally realized that I was breaking rules all this week, and thought about other ways I could break the rules. What rules have I not broken?  Well, all of my blocks have a backing and a circle placed on it.  How about a backing that already has circles, so I don't need to place anything else on it! 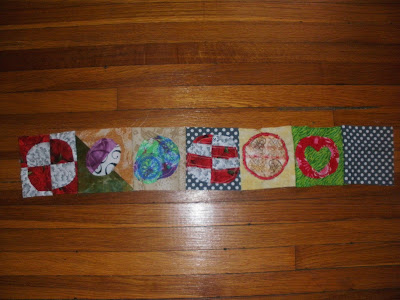 Here they are all together. Not a lot of light backgrounds in this row. I need to find and cut some more. 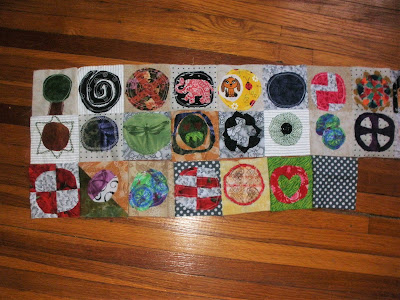 [edited to add this next photo: I missed a row! This is what it looks like with the previous rows:] 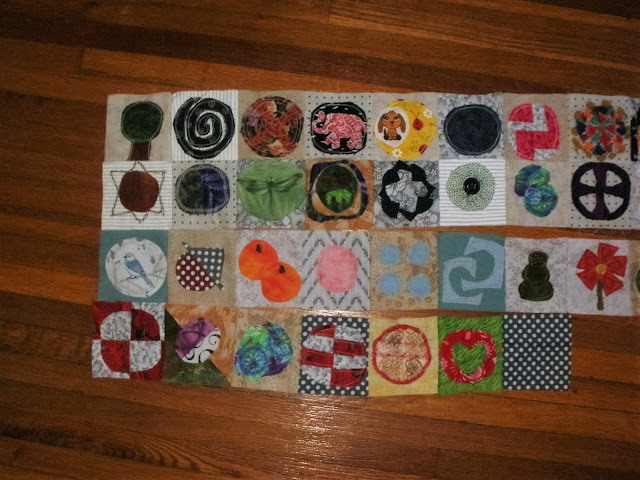 If you can think of other ways I can break the rules, please let me know!
Posted by Shasta Matova at 11:21 AM

I LOVE how this project is evolving: this set of circles are my favourites so far. And I like your attitude.

How about some of us sending you circles to add to your project. Hughesjeanne @hotmail.com

I'm sure you'll find more ways of breaking the rules. I'm just in the process of learning to set rules for improv.

Interesting fabrics and I love the heart!