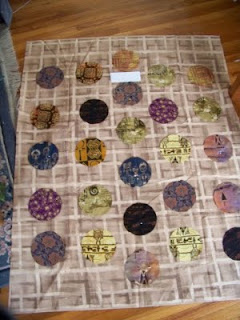 I'm still working on the circle quilt. At this pace, I should stick to much faster projects! The circles have all been applied, and I am working on the last of the border. I decided to do a simple border, and let the fabric tell me what to do. That is, I sewed the leftover fabrics together in the same size they happened to be. So they aren't blocks or improvisional, just strips of fabric strung together. It'll be okay though.

When I first laid out the circles, I imagined that I let everyone in the family decide which craft project they wanted, and this one was the one that most people wanted, and not just because their other option was a luggage tag. Looking at it yesterday though, I had a "What was I thinking" moment. It is really busier than most things I make, and since I have been looking at modern quilts, with simple lines, and lots of white background, this one seems outlandish by comparison.

I really do hope I get it done today, because I have many more gifts to make!

The picture is of the first layout, when I really liked the quilt.. I pinned some circles down, but was afraid those pins would poke me, and cause problems with movement on the sewing machine, so I didn't do them all. I went back and did the rest, and then some of them fell off in process, and I threw those back on without careful measurement, so they don't look like this layout anymore, but it's a good approximation. I did press all the fabric before starting, but this must have been after some of the circles were sewn on. I'll have to be sure to press the whole thing again before quilting.
Posted by Shasta Matova at 11:04 AM

It's beautiful!!!! I don't know what's so appealing about circles, but I love them. Someone is going to be very happy to get this!

Very nice! All the fabrics make it a real showpiece!

pretty quilt. thanks for coming to my bog, saying hello and entering the giveaway. good luck