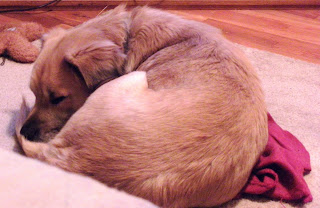 See how sweet and innocent that dog looks? And clean? Did you notice clean?  We gave the dog a bath. This meant this was his first time upstairs.   He was afraid of going upstairs, and then wouldn't get into the bath.  He was so scared, he wouldn't eat the treats.  He had to be carried into the bathtub.  He handled the bath okay - he loves to be petted.  Then he jumped out of the tub because we weren't quick enough with the towel. I used a medicated shampoo for dry skin, so he doesn't smell good, but he is sooo very soft. Very very soft and fluffy.

And now he thinks he can come upstairs whenever he wants.  I have hardwood floors, even on the steps, and he doesn't have much traction, but he does okay.  He is always startling me when I am upstairs because I am not expecting him.

And if that wasn't enough adventure, my daughter's friend came over.  She has a dog, and Zeus just loved her.  She lets him lick her face, something we don't do. He had a great time moving from between the three of us to get petted.  Then we decided it was time to let him out.  I've let him out once before without his leash, and he handled that just fine.  I don't have a fence yet, but he is a well behaved dog and does come when called.  We let him out again without the leash, and he bolted.  I called for him, but it didn't work.

We had a panic, and I decided to take the car to follow our regular walking path.  The girls decided to walk and look for him in the alley.  I went back home, to see if the girls had found him.  They hadn't.

We decided to try again, again with me driving, and them looking on foot. The girls went out. As I was about to go to my car,  I heard a bark, and wasn't sure it was him, but I decided to call again.  Yelling out loud in the neighborhood, bothering the neighbors and drawing attention to my predicament, isn't something I like to do, but desperate circumstances called for it.  It turns out that my daughter had seen him, and was chasing him, and he ran straight to the yard, and when I called him, he went right in the house!

Yes, we learned our lesson.  Always take him out on a leash. And get a fence ASAP!

In quilting news, I am piecing the backing for the Simply Squares quilt.  Zeus did try to get on the fabric when I set it on the floor to see where and how much fabric I had to add, but I told him to get off, and he behaved and stayed off of the fabric.
Posted by Shasta Matova at 9:18 AM

Awww - he looks so cuddly! Our neighbors have a very small dog, teeny tiny, and they go out with it all the time - no fence, no leash, and we live on a very busy road. I think they're NUTS - it's an accident waiting to happen. In a neighborhood it isn't so bad. Still, they need to come when you call them! I think it's actually good at this point that you don't have a fence, leash-training is important, and teaching the "come" command while he's on a leash will save you some grief down the road. You want him to still come when he's off-leash but safe in your yard. It sounds like he's really responding to your commands, which is wonderful!

Oh, my! I am so sorry...but this made me laugh. I once chased our dog ...me in the car...her running...for two solid miles. She knew she was in trouble and got scared and then was scared of me in the car, calling her like a crazy woman. I learned a lot of lessons that day. Remember what I said about Zeus training you? There's a learning curve...but you're coming along just fine ;)

What a scary experience! My dogs get out now and then and it is such an ordeal to get them back again.

thank goodness you got him back without incidence! Scarey!
Dogs will always think like dogs, that I've come to accept - but we love them anyway...they are truly man's best friend and love us unconditionally.
He looks so cute

Dogs know a good thing when they have it. I have a fenced yard and a workman left the gate open. I let our dog out without looking at the gates. When he didn't come back for awhile I went out the front door to start looking for him. He was on the front porch just waiting to come in.
Zeus already knows what a good home he has and I'm glad you found him. For now, walk with a leash, as others have suggested, and look into getting the fence. Life will be much easier if you do.

Oh yes, get a fence!!! And keep him leashed. Choco gets out and is gone! But we don't have a lot of traffic in one direction (in the other a lot) but even so I am frantic. She just doesn't think when she realizes she is free. Just runs and does NOT look both ways when crossing the street! It is so easy to lose an animal to traffic.