New Block of the Month 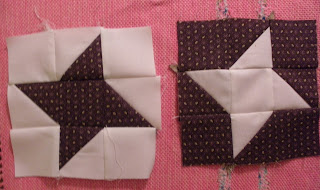 Our local quilt shop (LQS) is having a block of the month program again this year.  I collected blocks another year as well, but then either they stopped doing it, or I did, or both.  But they are doing it again this year.  The label says it is Series #7 of the Thangles Block of the Month.  They give you fabric to make two 6" blocks each month for $1.  You have to take the finished blocks the following month to get the next set of blocks for $1. Otherwise you pay $2.  I like this plan, because it will keep me current. The blocks are then put together in a straight setting.  But if you want to enclose the blocks in star points, then you can buy the kit for the optional setting.

They had four different colorways to choose from, and I chose the Civil War ones.  I have decided to make the blocks, and use my own fabric for the star points.

Have you heard of Thangles?  I had a roll of triangle paper that I had purchased for a previous LQS project.  I think it was part of a class.  That paper comes in a roll, and has lines that you sew down and lines where you cut.  It makes it very easy to make a whole bunch of half square triangles at a time.  Thangles is a little bit different because (I think) it is designed to work with jelly rolls.  You know how you would need 2 7/8 fabric to make a 2 inch hst?  With Thangles, you can make 2 inch hsts out of 2 1/2 inch jelly roll, because the paper aligns the pieces so that the some of the little points are already cut off. 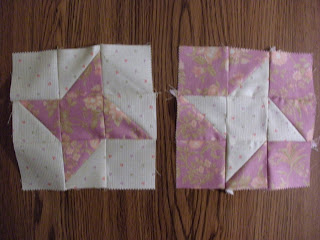 I don't normally make practice blocks, but since I had limited quantity of the Civil War fabric, so I did this time.  I am thinking one of the practice blocks will be for Ally's Christmas challenge.  The deadline is tonight for this month, which I won't be able to make, but maybe I will be early for next month.
Posted by Shasta Matova at 8:26 PM

Email ThisBlogThis!Share to TwitterShare to FacebookShare to Pinterest
Labels: block of the month, finished block, quilting, Thangles Block of the Month

I did a Thangles BOM a couple of years ago. I found it boring to make HST over and over again. But I was able to make a beautiful quilt out of them.