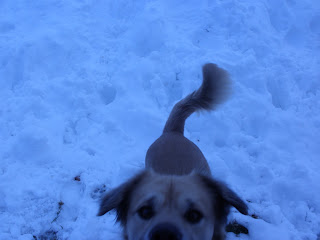 I am finished with quilting the Simply Squares quilt.  I need to trim and bind it.

You can thank Zeus for my speedy progress on this quilt.  He leaves me alone to quilt, but when I am sitting on the couch watching tv, or even on the computer, he decides he wants attention.  He is very pushy, putting himself under your hand so you will pet him, or even whining.  He won't just sit next to you; he expects attention the whole time.  Now I have to get him to leave me alone when I am on the computer.  So far, I have been reading blogs, and doing other casual things, so it wasn't a big deal for me to pet him while I was on the computer.  But when I work from home, I am on the computer a lot, and I would prefer to not be interrupted when I am working.

I have been also teaching him the "Go to Bed" command.  I have this big pillow I got for him (the label said "dog bed" and fits perfectly in the crate which we returned). I figured that I could move the pillow to whatever room I wanted him to stay in.  It would be a good command when we needed him out of the way.  We had a couple of training sessions, and he didn't quite understand. He would lie down anywhere on the floor, but we were making progress.

When he was whining yesterday while I was on the computer, I said "go to bed", not really expecting him to do it, because I didn't think he understood the command.  He went straight to the couch, because that is where he sleeps when I am sleeping upstairs. He apparently understands the command, just didn't understand why I was calling the pillow "bed."   When I am downstairs, he generally sleeps in whatever room I am, although he will leave the room if that room isn't comfortable for him.

I know he has been trained already, but I don't know what vocabulary has been used, so I think I am confusing him by using different words for different things.  Today, I asked him where his toy was, and he got it for me!  He doesn't do it every time, but that might be because he didn't want to play tug of war on a hardwood floor.

I don't really want to play tug of war with him until he understands the "drop it" command.  I am having a hard time teaching it to him, because when I have the treats out, he drops the toy before I can say drop it.  He still doesn't understand "stand" either, because to him it probably means "come get your treat", and he doesn't understand that it has to do with a body position, even though I am reinforcing "sit" and "down" at the same time as I am teaching him "stand".
Posted by Shasta Matova at 1:03 PM

Good for you on getting the quilting done! Oh Zeus sounds like he knows how to keep you busy - that is the cutest pic of him! I think they do get confused with different words, from person to person. He's a smart little guy though, he'll get it!

congrats of the finish!
coco never drops - she is a super tugger - good luck!

Sounds like he is a pretty smart dog to me! My dog will not leave me alone unless she is touching me someplace... sleeping on my foot, leaning against my leg. Otherwise it is constant pawing and pushing. "Go to bed" will lever be learned I'm afraid, nor, "where
s your toy?" Good for Zeus!