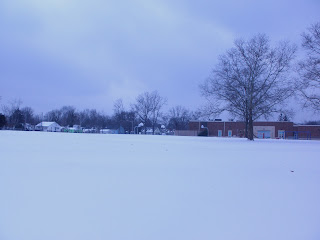 Paula gave me the idea to quilt figure eights instead of just loops, which I thought was an excellent idea.  I was thinking about not using it though, because I had already quilted several rows of the Simply Squares quilt, and I think consistency will look better than changing plans midway.

Then I was reading a blog where the blogger was tired of making more blocks, and trying to decide whether to stop and make the quilt as it was, or make more blocks to make it larger as she had intended.  My advice to her was to make the blocks, unless that would stop her from finishing the quilt at all.  Generally when someone looks at my quilts, they don't know the circumstances that they were made in, so they will look at the quilt as a measure of my skill level.  And combining easy squares with bad quilting, is well, just lazy. Especially since I know a better way.

Yesterday, I quilted a row of S's, then turned it around, and quilted a row of S's over them to make a figure 8.  It looks really good, neat enough for the modern quilters, even.  This means that all of the loose threads will be at the ends, and there will be no threads to bury. I decided to continue with those instead of my original stitching.  I could add them both on the seams and in the centers to create the look that I was originally going for, but I have decided for now that I will just make them on the seams.  The blocks are small, and don't need that much quilting, and I want to make sure I don't run out of the brown thread.  I'll decide for sure when I am done with the seams.

Yesterday, I ripped out the rows and rows of bad quilting.  Since my stitch length is not even, there were some parts that were easy to rip, and some parts that are very very hard. I am hoping that the busy fabric will hide anything I missed, although I do plan to go over it one more time to see what else I can rip.  Unbasting would probably help, but that is just going too far.

Back to quilting!
Posted by Shasta Matova at 4:31 PM

Oh how I hate ripping out quilting - good for you though, then you'll be pleased with the end product!

I just know the end will justify the means, good for you!

Hey! Where's the shame? You figured out something quite brilliant! Now, why are you teasing us instead of showing us your 8's...smart woman, making us wait;) Love your sharing!