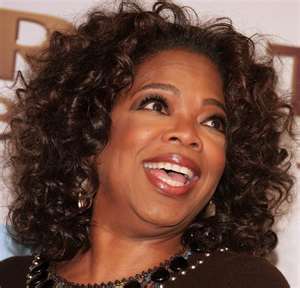 I turned on the television to watch the news, and managed to catch the very last part of Oprah's show. I only knew there was a secret, but not what the secret was. Later, I found out that Oprah's mother had given a baby for adoption, and had kept it a secret for all these years.

I didn't watch the show, so I don't know all the details or how she handled it, but what little bits I do know, makes me think she did an excellent job of taking the high road. I haven't had any issues lately where I have had to watch  my footing on the high road, but it seems like a good time to learn some lessons from Oprah for when I do.

Last night, I dreamed I wrote a post about what taking the high road means. I wrote a list of the ways we can learn from Oprah. Uggh, now I have to figure out what was on the list!

Openness.
I like that she aired the news on her show.  Trying to hide the truth doesn't really work, and by announcing the facts herself, she can avoid a lot of speculation and rumor.


Honesty
Not having watched the show, and not having researched her story, I don't know if there was complete honesty in the disclosure, but it seems like it was.  And by being open, she can keep her reputation as an honest person by not lying or hiding the truth.  And I think honesty is the best policy.

Sympathy
Although it does seem like she had some anger that her mother had kept this a secret, I think she does sympathize with her mother's situation at the time, and understands the adoption decision.

Gratitude
I am glad that she was willing to look at the silver lining, and was able to find it.

Focus
I'm not sure what the right word is for this, but I heard that her friends did not want her to air this secret.  I am glad she kept the focus on the people that mattered.  The mother and her new sister were obviously okay with the airing, since they were a part of it, and they are the ones who are a part of the story.  The other, peripheral, people, are important and can certainly give advice, but their feedback should not be weighed as highly as the people who are a part of the story.  The others have had their turn in their own stories, and probably will in the future.

Listening
She asked questions and listened to the answer.  She didn't assume to know the answers to the questions and for her family members. In the questions I did hear her ask, she asked open ended questions, and did not seem to be leading them.   I know some of this was for the show, and to facilitate the forum of the show, but hopefully, she did the same in real life.

Managing the situation with calm and dignity instead of throwing accusations and joining the argument is a big part of taking the high road, and I think Oprah has done that as well, at least in public.

What does taking the high road mean to you?
Posted by Shasta Matova at 10:13 AM

Verra, verra good post!
I too have been pondering Oprah's secret reveal. I think of the courage it took on her sister and mothers part. The sister's search was to find her mother, and finding a sister too, Oprah, was a bonus. Who knew. I admire Oprah for the honesty, compassion and sharing the epiphanies of her journey in this event.
Taking the High Road to me is letting the sunshine around me shine through me. When I gather up my talents, and stretch the undeveloped ones I get closer to this desire of my heart.

Well - I don't watch Oprah, can't stand her. Nothing personal, I just can't stand celebrities [and that includes politicians on both sides.]
Taking the high road - not letting my anger or emotions get the better of me, and considering the feelings of those around me before I speak or act. That's what it means to me.

I taped that show and watched it. Absolutely amazing story and I have to hand it to her sister Patricia for having kept this information to herself and not exploiting to the news media for quick cash etc.

Take the high road to me is letting go. Why bother dwelling on something that you know you are in the right about....just let it go and move on. My example is my sister who borrowed $2000 from me over 8 years ago to get out of a bad relationship. Never let family borrow or you must take the high road!

I didnt realize that this was why you named your blog, The High Road Quilter...Perfect! I am always telling my children..that when I die if they remember anything, let it be that I taught them to take the high road!! So it was ironic to read your post. Now when I read it, I will always think of taking the High Road:) My children are both adopted. So I was interested in seeing this segment of Oprah as this new sister had been put up for adoption. I was absolutely amazed with Oprah's program and the grace with which both she and her new sister, Patricia revealed this news in such a public forum.

Hmm. I'd never heard the term Take the High Road, so I have wondered on how you chose the name. The phrase brings up in my memory "You take the high road and I'll take the low road and I'll be in Scotland a fore ye." High road might be taking a positive outlook on life.