I didn't get any sewing done yesterday, since I was running errands, but that doesn't mean I wasn't thinking about quilting!  One of my errands was a stop at the library.  While I was there, a book that was displayed jumped out at me.  It's called Josephine

by Patricia Hruby Powell. It's a children's book - a biography about The Dazzling Life of Josephine Baker. 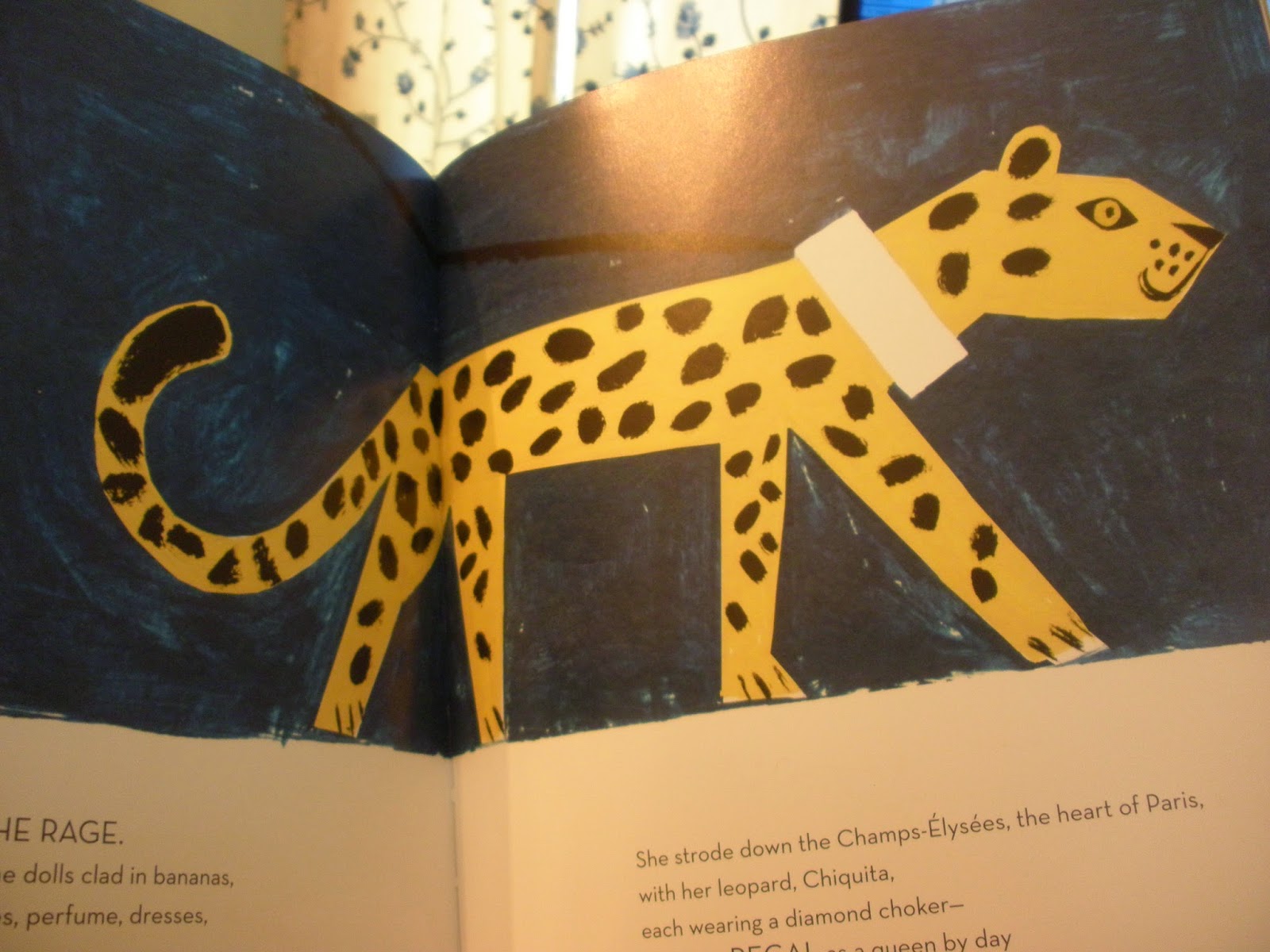 And in it, is an image of a leopard that is just perfect for the elephant parade quilt. Most of it, particularly the neck and face, has a change I was already thinking about making for my next block, but this book gives me a better idea of how to do the feet. 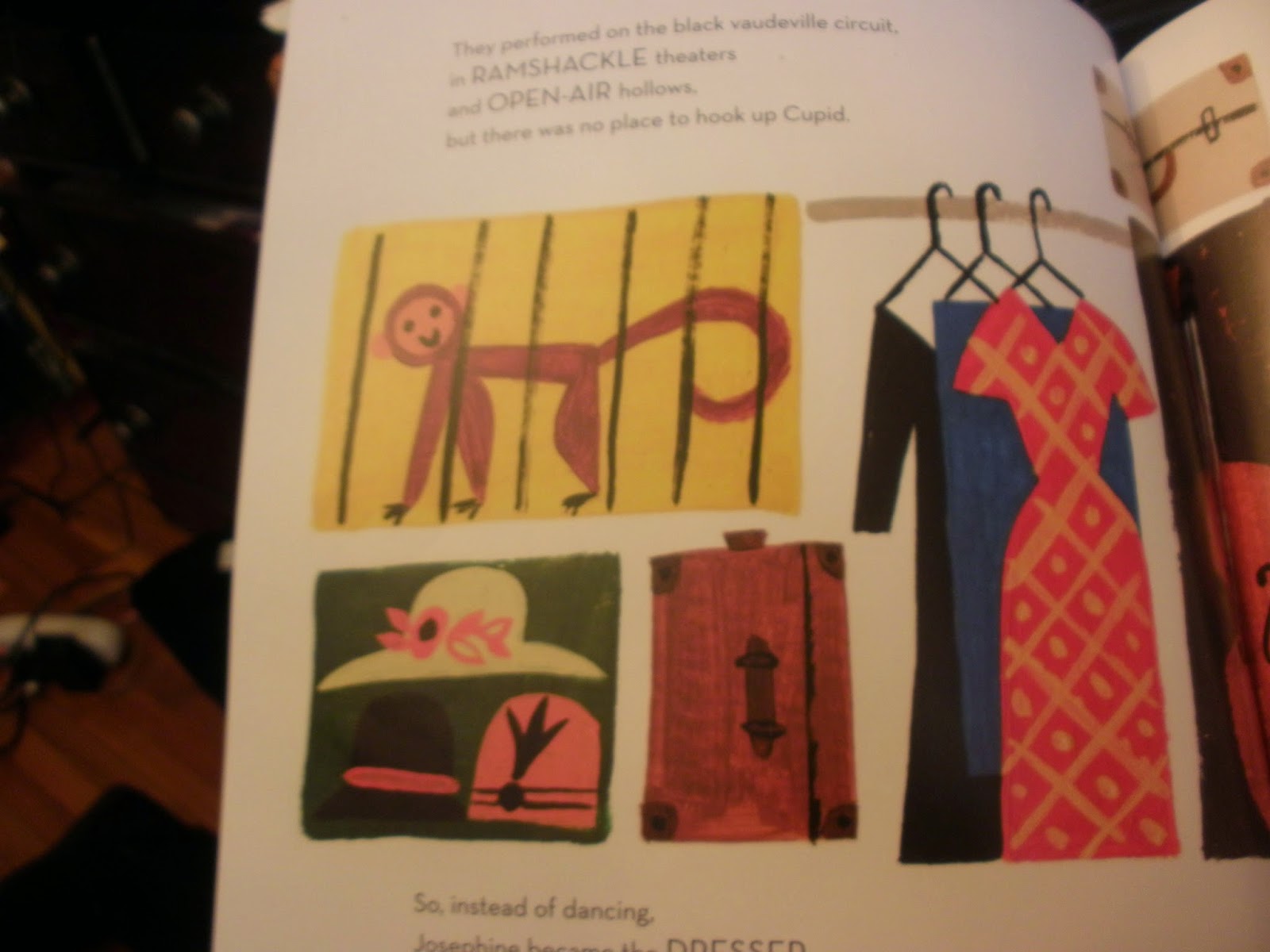 There are lots of other beautiful images in it as well.  In fact, the book is just filled with inspiration.  When I just looked it up on Amazon, I see it is a Coretta Scott King Illustrator Honor Book. Well deserved.

See that monkey?  Hmm, an elephant parade could use a monkey, could it not? It would add to the whimsical nature of the quilt. 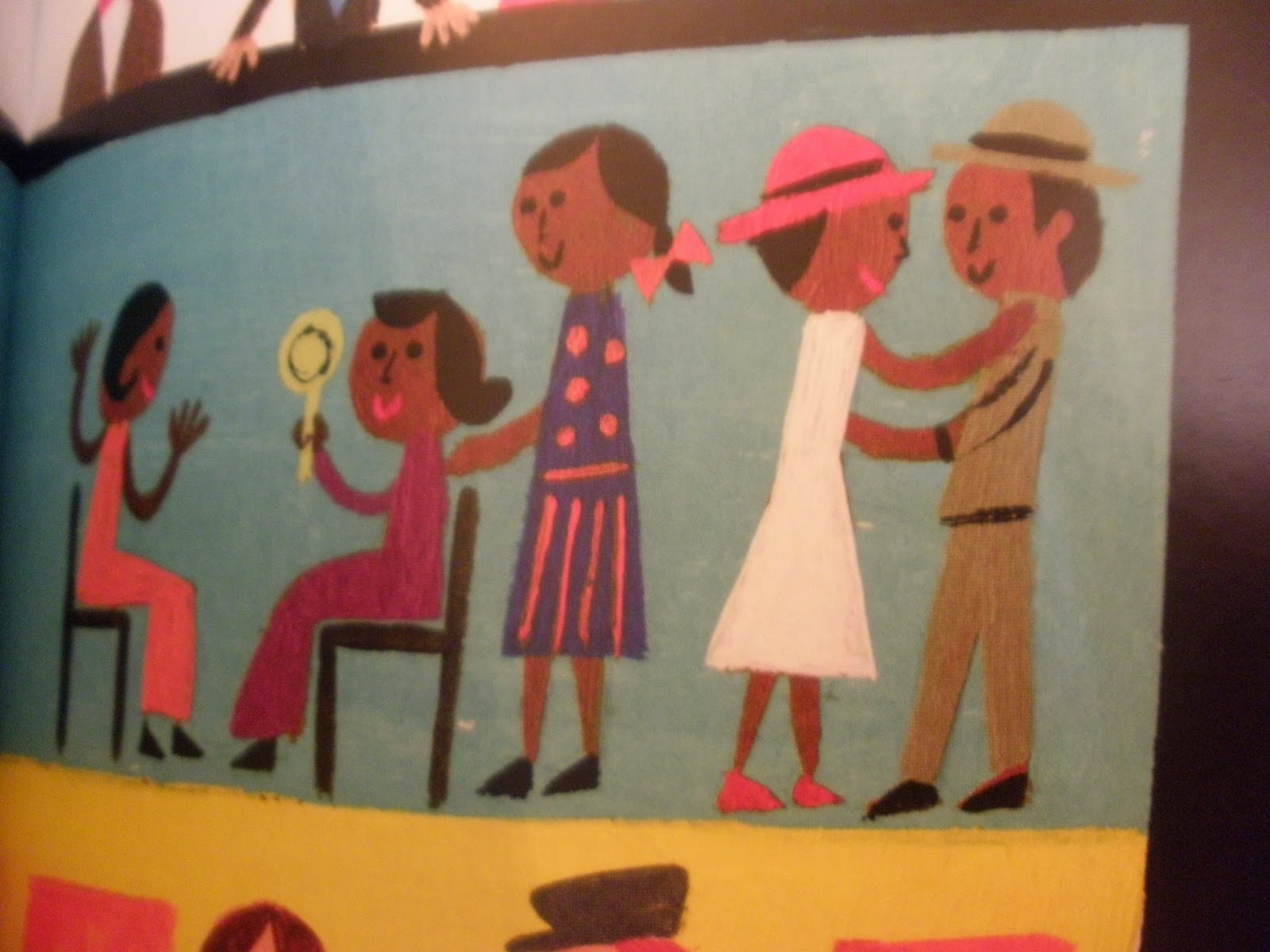 And look at the people. Don't you think that dancing couple would love to be in the parade too? I have African fabrics I can use for their dresses. Maybe instead of flowers, I can make people. I realize that I am taking out the simplicity of this modern quilt with all these, which is striking since the simplicity is what drew me to the quilt in the first place.  One day, I might be able to make a simple modern quilt and keep it simple, but apparently, not today and not with this quilt. I haven't decided yet whether they should be dancing or walking in the quilt. 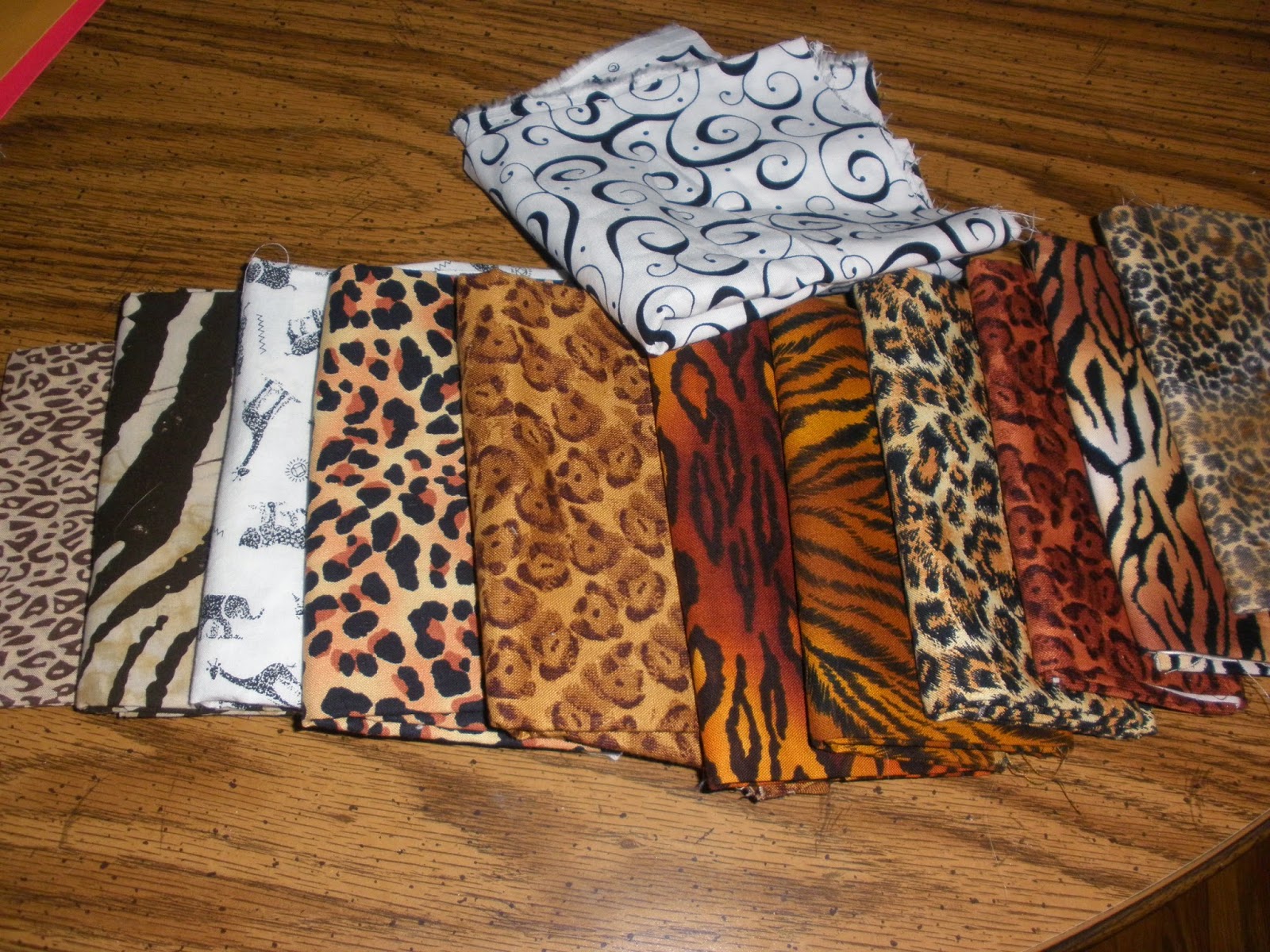 I also took my animal prints fabric to the experts.  I wanted to make sure that I used the prints appropriately for the various animals. I didn't want to use tiger fabric for a giraffe.  I was expecting them to say, this fabric is this animal, this fabric is that animal, etc.  Apparently some of the fabric I have are stylized and don't necessarily represent particular animals.  We decided on the leopard fabric. I think it is the one on the extreme right. That one isn't so important, because it will still look like a cat, so whatever animal you think it is, it is that.  The issue was more for the giraffe.  I don't have giraffe fabric, but I have decided to use one of these for it anyway - the one in the middle with the big circles. I think it is a better option than using a solid. After all that, it turns out that we will have an animal that is impersonating another animal in the quilt.

My sister also said the one on the very left would work well as a snake.  Maybe a snake will sneak into the sashing!

Yyou have some exciting options and a treasure trove of inspiration in that book! You're well on your way to assembling one wonderful elephant parade... I think your happy, joyful people should DANCE! Whenever walking or dancing are choices, I believe we should always choose to dance! :)

Love the book and all of your ideas! I used some of those fabrics in my jungle wedding gift quilt last July-August and loved the result. This will be one great quilt!

I'm really enjoying the elephant parade qal and love your take on it with the addition of other animals. So much fun!

I think that children's book illustrations are a fantastic source of inspiration! I was thinking of Eric Carle's children's book illustrations when I selected fabrics for a primarily black baby quilt that I'm working on currently, and it really helped to have that aesthetic in mind. Even though my quilt is graphic and you wouldn't immediate think of Eric Carle when you look at it, the color palette and fabric textures that were inspired by his illustrations help to ensure the finished quilt doesn't feel too Amish or grown up.

I know what you mean about being drawn to simple quilts, but not being able to stop myself from making them complicated! It sounds like your animal quilt is going to be fantastic.

WOW! This is an awesome book for inspiration! I love the minimalist style of all those illustrations. That leopard is fabulous! I can't wait to see what other animals you will be adding to the parade, Shasta. So excited to see you having so much fun with this!

I love the artwork in that book! Make them dancing, for sure dancing. I love the fabric you picked for the giraffe, I think it's perfect. And I do think you need a monkey. *G* I don't care if the quilt is supposed to be simple, you're making it your own, you're having fun, and that's what counts!!!!