More Additions to the Quote Quilt

We are down the homestretch in adding things to the Quote Quilt. There will be one more batch of things that will be added, and then I will look over the rest of the ideas and decide which ones have to be in this quilt and which ones can wait for another quilt.

Here are this week's additions. 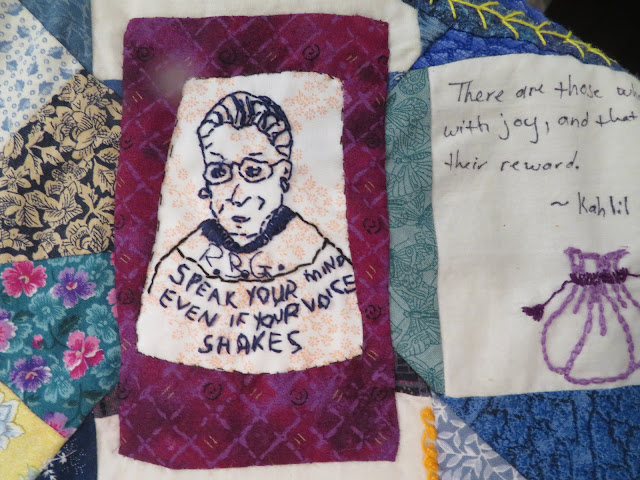 I have been wanting to add portraits to the quilt from the very beginning. But I was hesitant, because my drawing skills and embroidery skills aren't very good. Would it look like the person?  Then there was the choosing of the people to put in the quilt.  Who was influential enough to put in the quilt? A president? And if that, would it have to be all the presidents in the time period, whether I liked them or not?
After Justice Ginsberg died, she just had to be in the quilt. She influenced all of our lives, and although I didn't realize it, I had been following her for a while. I saw the movie, On the Basis of Sex, and have watched several of her interviews online. As usual, the drawing looked more like her. That is the problem with copies, they degrade with each iteration. We notice that at work. When you copy an image from a copy, each one is more faded than the original.
I got the quote on one of the memes about her, and didn't bother to look up the quote until after I had stitched it. It turns out that it isn't her quote. But it is a good quote and it is staying on the quilt.
The quote on the right is my daughter's handwriting. She doesn't remember writing that. That coin purse is one of my first additions to the quilt, and I really like how it turned out. 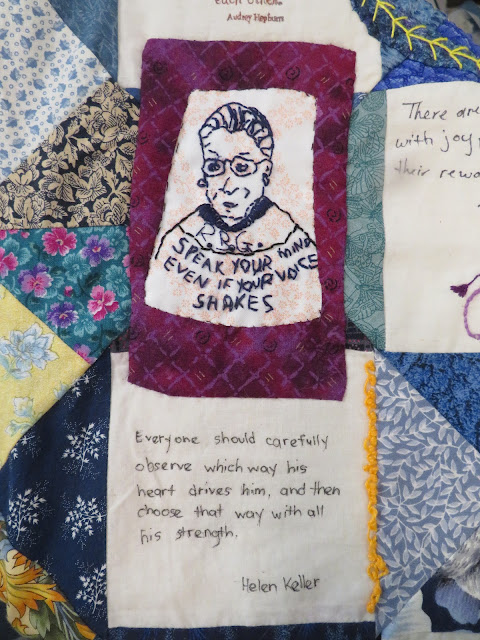 Here she is again so you can admire her again. I like her setting near the Helen Keller quote. 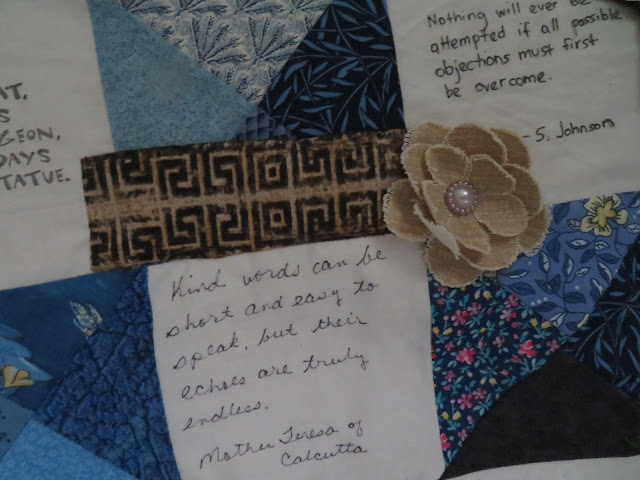 This fabric is from the zebra print. I like how it works with the flower that was already there. 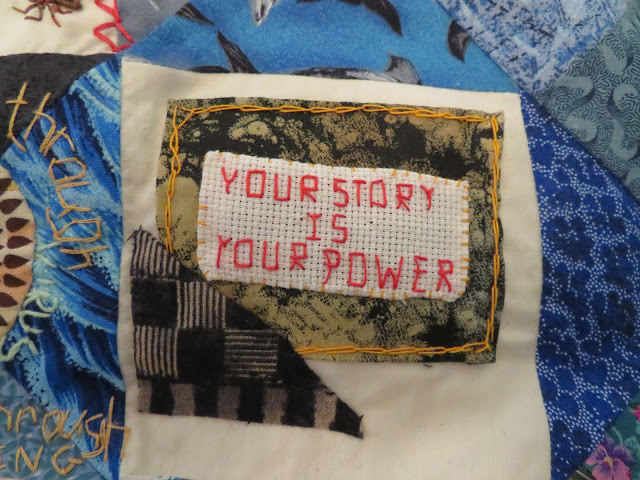 I had a scrap of Aida left after doing the moon, and figured it would work well to write letters. The quote in an advertisement I saw said "your story is beautiful" but I wanted to make sure that is what I want the story to be. I put the words through a search engine and found "your story is your power" which I like much better. It is a title of a book.

Last time, I said I was de-collaging and re-collaging, and it felt like it wasn't a real re-collage since I wasn't layering, so I did this with layers. The quote wound up not covering the triangle so it doesn't layer as much as I had planned, but it is staying as is. This covers up a duplicate quote that was already there and the darker colors will hopefully take away a bit of the every other block is muslin look. 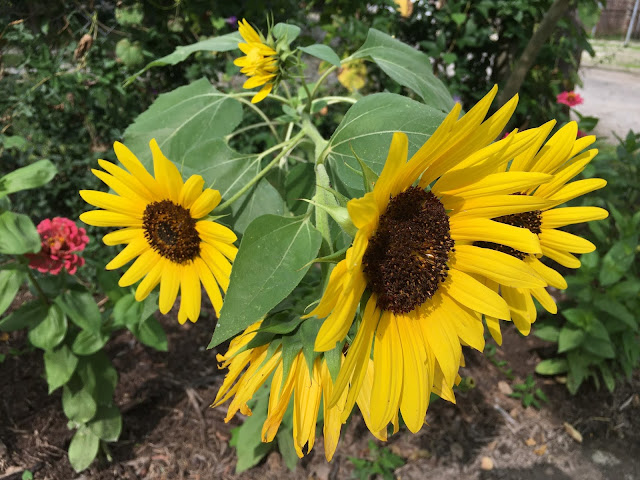 I spent another week of stitching more than fifteen minutes a day with the additions to the quote quilt. I have also been watching Craftsy videos. They are back online and are offering a very inexpensive annual subscription.

I've had computer difficulties. Facebook doesn't always sign me in when I put in the password. I researched how to fix that and was told to clear my cache. I did that, and now Pinterest has lost all of my pins so I have to start all over again. Craftsy also doesn't have the things I had saved in past years. In the overall scheme of things, it is not a big deal to lose all the inspiration I have been squirreling away since new inspiration keeps coming, but it is still mildly irritating. Another thing to add to the 2020 log.

I love the RBG piece. I knew it was her right away.
Thanks for the heads up on what happens when you clear your cache. If I lost all my pins I think I would go into shock. But then like you said, I’d get over it.

Oh yes, Ruth Bader Ginsburg most definitely needs a place of honour on your quilt. A most remarkable woman and all of a sudden this world dims a little less brighter with her passing. I too, knew it was RBG straight away. As for presidents.....please, please, surely not Trump. =)

"Speak your voice even if your voice shakes" was SO POWERFUL to read. That is a wonderful addition to your piece and wonderful stitching!!!

I smiled when I saw RBG’s portrait! It looks just like her. Great job!

That was a lovely tribute to RBG! She was such an incredible person!

This quilt is such an amazing inspiration! What a treasure this is and will be for years to come!