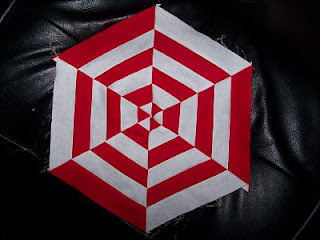 Have you seen Helen's prayer flag challenge? It looks and sounds fabulous, and I am going to do it. After all, when you are working on 6 quilts, what's one more. It is small, and it will be 1/7th of what I'm working on. Each additional quilt is proportionately easier.

I made a sample of my optical illusion quilt. I made the rows the same size, because it would take up less fabric and I didn't want to take up valuable time figuring out what size to make each row. I probably should have practiced so I could figure out how I wanted to do it. I made the angles 60 degrees instead of 6 degrees, because I thought all of my rulers had that marking. Turns out that only one of them did, and it was a small one. I am pretty sure I have a bigger ruler with a 60 degree marking, but I decided I would rather not waste time looking for it, so I had to finagle the small ruler on the big ruler, and I kept having to relearn how to turn the ruler so that the angle mark was at the right place for me to cut the angle right. Hopefully that practice will make it easier on the real thing. I didn't add seam allowance, but I found out that I didn't have to.

I pressed all the rows at the end when I made the sample, and I think I will fingerpress first, or maybe I will press each row as I sew it, because it is hard to make everything turn the right way when they are such tiny pieces. Or maybe I should use a smaller iron. I didn't pin the pieces together and found out that I really didn't need to. I probably will pin once in a while just to keep the pieces straight, but I definitely won't be piecing each seam like I was originally planning.

Oh yeah, and it turns out that my sample illusion quilt looks exactly like a spider web quilt. I knew there was a word I was thinking off when I was trying to describe it, saying that it was like a bargello or trip around the world, only with trapezoids. I am going to finish off this sample and make a small wall hanging out of it. And when I am finished with it and the optical illusion quilt, I will be able to check off "make spiderweb quilt" off my to-do list, even though when I thought of a spiderweb quilt, I was thinking of making it scrappy.
Posted by Shasta Matova at 7:17 PM

That....is...fantastic. I LOVE the way this looks!

I'm with you, do we have Spring fever or what? My projects are piling up in all their stages...so why not make more prayer flags? My last set were made of silk...I was learning to paint and dye little squares with Tibetan symbols...hung them in a special tree..and...
the birds took them all, one by one! I like to think they all had blessed nests!!!

That spiderweb looks so nice!

t will seem to see many opened beach umbrellas on the sand.
ciao ciao

Excellent job! Thanks for sharing your lovely blog, keep up the great work!