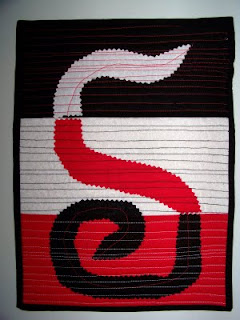 This is a door hanger designed by the Gift Recipient. He drew out the pattern for me and my mother a few months back. I can't find the original drawing, so hopefully he wasn't particular about which colors went where.

It is made to hang on the door so people will know which room belongs to him. I'm glad he chose the only solid colors I remembered having. I did find a couple other colors in a scrap box sent by a fellow quilter when I was looking for binding fabric.

Here's how I made it:

I played around with different fonts to find an S that I liked. I traced it on paper, using my monitor as the light source, and cut it a little thicker so it would fit better on the background. I used fusible applique. Did you know you needed to reverse the shape when you fusible applique. Yeah, so did I. Did you know there is a particular side you need to put your shape template on your fusible applique? Yep, knew that too. Did you know that you need to make sure that the color of the shape isn't the same color as the color of the background? Yeah, me too. I knew all of that. I was just testing it all to make sure it was really true.

I saved some time by not stitching down the applique, except as part of the straight line stitching. I also saved time by not trying to see if free motion quilting would work for me on this project. The lines are randomly straight, as in, I was following a seam line, but I was sewing fast, so no guarantees, and randomly distanced apart. This made it easier to sew some lines closer to make sure the applique was stitched down, and the hanging sleeve is secured with a quilting stitch as well. The thread used is the color that isn't on the background or the applique, so all three sections have all three colors.

Then I tried to do that single fold binding I told you about last post. Ugh. I found some black fabric already cut, folded and sewn together. Some of it was inside out so it was part of some other project. It was just the right size. The stitches were too close together to undo, but I went ahead and put it on this quilt, as is. You can't see the black stitching on black fabric anyway, unless you look real close. But I think that it would make a great design idea for someone who can sew straight lines. And it went on without any tears, which is a plus.

I did have some "What was I thinking, will he really appreciate it?" feeling while I was making it. But now, I think it looks good and he will appreciate a quilt that he designed.
Posted by Shasta Matova at 11:40 PM

I love it! I think it looks great, creative, and one of a kind door hanging!

That is AWESOME. Really creative and the design rocks! He'll love it. If he doesn't, I'll change my name to Sue and put it on my door.

And yes, I know all that about fusible, but still manage to get it wrong half the time!