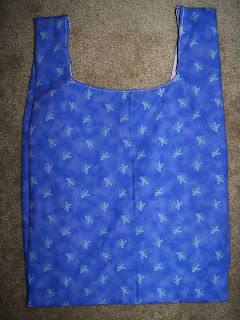 I decided to make something practical for this gift recipient. It isn't what she wants or what she would ask for, but you can always use bags, right? She really likes shopping, and does attempt to be green. It doesn't have to be pretty, just useful, so some of the pressure is off. I used pretty fabric that she would like, and even the inside is pretty fabric. If I thought cutting two of the same shape for the aprons was hard, I got a chance to practice cutting four of the same shape, using a flimsy plastic bag as a template. At least I cut all four layers at the same time. I'm so glad I have the sharp scissors my mother gave me. I did my best with the sewing, although some of the top stitching isn't pretty (the part that goes over all four layers), but it's probably as good a quality as a store bought thing would be. We hardly ever look for flaws in store-bought things, even though we easily look for them in hand-made things. It took two years for me to notice a flaw in my bathroom rug.

I made a reusable grocery bag following the instructions at this website. It's a great bag, works just like the plastic ones you get at the store. The instructions are really good. The only advice I can give is to follow the instructions exactly, without thinking ahead. When it said, "sew the sides" I wasn't sure whether that meant just the straight sides, or the curved part of the handle on that side as well. The picture is closeup, and you can't see what has been done and what hasn't. And although I tried to read ahead to see when we were told to sew the curved part, I missed it and had to do some unsewing. Nothing major though. The bottom seam is the only one that is not hidden, but it is inside the bag where you wouldn't see it unless you looked really hard. 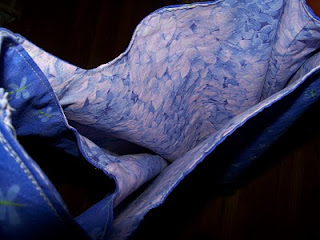 Overall, I don't think I would be excited to get a grocery bag as a gift, but I would certainly be able to use it. I'm happy with it. It may seem wonderful that I only have two gifts left, but I apparently left the hardest people for last. I generally have trouble figuring out what to get them every gift giving season. I am also short some birthday gifts - I have 2 out of the four purchased.

Even though I keep thinking about all my unfinished projects, and the ones I haven't even started, I am really enjoying this little break from normal sewing, and doing these things and learning stuff. I think in the future, instead of saying "I want to make that someday," maybe once in a while, I should just go ahead and do it right then and there. I think after I am finished with all these, I am going to try to keep up the momentum and make some ornaments / banners, something to make next year's decorating more festive. Of course, I should probably bring up the stuff I already have to see what I need. 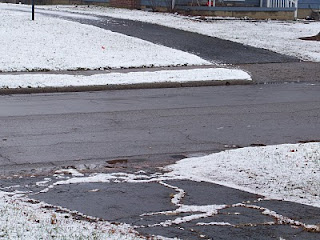 It snowed last night - the first time this season that it stuck to the ground. It is a perfect snow, as you can see. Covers the ugly grass, and leaves the street and sidewalk free for use.
Posted by Shasta Matova at 11:19 PM

Darling fabric! And as someone who has made a kazillion bags..I know how hard that topstitching is! If you don't have a walking foot, you would love having one for this!

Also, I offered a free pattern for not only making my version of this bag, but a pocket on it that allowed it to be pocket pouched (like a quillow)my links on the right of my blog.

But of course, I would think of more work for you...ha! This is really cute, no excuse not to love it!

P.S. If you saw how many projects I have left to finish, You would order me up a handmade white wrap jacket;)