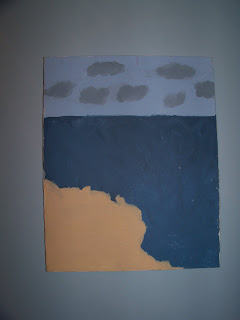 Just kidding. Just seeing if you were paying attention. Since handmade things can't be returned, I thought a personalized gift would be appreciated, like the door hanger in Gift #1, but tailored for the recipient's tastes. I was thinking it could be used on a door, but also on a wall. In case the Gift Recipient ever forgot her name. I ran out of Steam A Seam so I used Heat and Bond. The directions say "Do Not Sew". Sounds good to me. I've heard that it gums up the needle. I was thinking of just quilting the background, but then I saw on another blog that someone had framed their quilt instead of quilting it. I thought that would work really well for this thing. I happened to have a canvas frame that I had attempted to paint years ago. It is supposed to be a beach scene, and I was going to glue fun stuff on the sand. It doesn't look anything like I had imagined. I obviously didn't get my brother's painting / drawing talent that my daughter and my nieces also managed to pick up since I painted this. 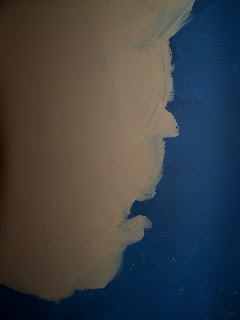 If you look at it sideways, it looks like a silhouette of a face. Maybe it is art, with some deep hidden meaning and I just didn't know it. Anyway, this frame is bigger than the original thing I envisioned, so I have to make some more applique pieces before I can show the finished product.
Posted by Shasta Matova at 2:57 PM

Well I knew right off it was a beach scene - the beach is my favorite place on earth. Can't wait to see what you add to this! And it does look like a face when you turn it.

You are way ahead of me on Christmas gifts... Handmade? Except for hubby no way and his is far from finished!