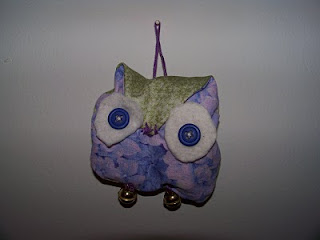 On Friday, I invited my mother to go to a charity sew-in with me. They meet monthly to make quilts for cancer patients, and since I just received the newsletter, I was freshly reminded. She, my nephew and I went there. I thought the nephew would bring his homework, but he had been instructed to learn about the project. What a great idea, interview people, write a report. Actually I don't know if the interviewing and writing a report was part of the plan, but it sounds good to me! He was very excited about being able to use a sewing machine for the first time. It turns out that they had decided to take December off for the holidays. We went home dejected.

Yesterday, he came over while his parents went to a birthday party. I gave him a choice between several different options, making paper German stars, fabric owls, baking cookies, or watching a movie. He wanted whatever it is that requires sewing. I had found this cute owl tutorial on Eileen's blog and wanted to make it someday, but I thought I should focus on my gifts first. This was my perfect opportunity to work on it. He was really excited. This requires machine sewing as well as hand sewing, so he got practice doing both. He said, "sewing isn't just for girls." I told him there were many famous male quilters. The machine kept moving the fabric in a circle - which is good because the template is kinda circular - so he got a lot of practice with 1. put the needle down, 2. lift the presser foot, 3. move the fabric, 4. put the presser foot down, 5. sew. It is hard to remember those steps in order. 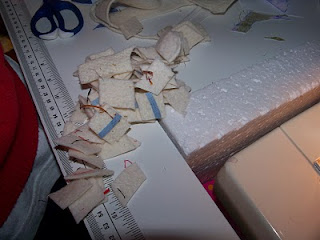 We used batting scraps for stuffing. Being a son of photographer(s), he is really good about freezing his pose when I was ready to photograph him. My daughter would have told me not to take pictures. He was surprised that I was taking a photo of batting scraps though, but seemed to understand when I told him it was for the blog. The eyes are made from batting scraps too. 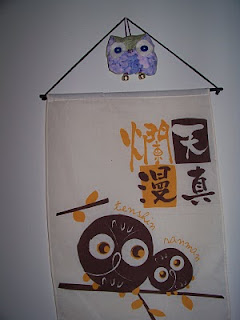 Then while we ate dinner, we watched an Indian movie, "Chakde", which is about a has-been male field hockey player who coaches a bunch of women athletes from all over the country with dreams of winning the World Cup. I thought it would be a good tie-in for being willing to break the boundaries society puts on you. We were only going to watch it while we are eating dinner, and then go back and make another owl, but he really got into the movie. And I learned a lot about field hockey from him, since he plays soccer. And he learned more about Indian values: "First you play for your country, then you play for your team, and then if there is any time left, you play for yourself." I know a lot of sports teams in other countries have those values also, but it rarely translates outside to real life as well.

We started on the second owl, but he didn't get a chance to finish it. He's going to give the first one to his mother, because of the purple and green colors. Next time he comes over, maybe I'll ask him to make me one as well. He wants to make a pillow next, or something that lets him do machine sewing longer.
Posted by Shasta Matova at 9:29 PM

Cute owl! Good for your nephew! He's right. Sewing is not just for girls!
Have I seen that tapestry before? Yep. I have!