The Case of the Disappearing Pepsi 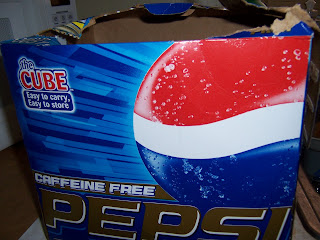 Once upon a time, I bought a cube of Pepsi. There are 24 cans in the cube. I don't think they sold them by the cube very long.

Well, they were rejected by my guests! I was reminded that carbonation has awful properties, and can actually disintegrate teeth. And cause gas. And has non-nutritive calories. I don't regularly drink soft drinks, but I thought that it would be just fine for a party.

I did remember that I lost about 10 pounds after college simply by stopping the daily soft drink, so I wasn't about to start up again. The case was too big to sit in my tiny kitchen, so I stored it to the basement with the extra dishes.

No problem, I had found a recipe that used a cola in roast beef, and thought these would be handy. I could just grab a can every time I made roast beef. At about that time, meat was rejected by my family. The daughter decided she was vegan.

Also at that time, I started noticing a definite decline in the quality of the meat sold at my regular grocery store. I would have continued to buy small quantities of meat for myself, but I didn't feel like finding another place, so I simply didn't buy meat.

So my soft drink cube sat in the basement and waited for another guest or another party or another recipe or a change in diet or when I decided to make pot roast just for me. Or I came up with another plan for it.

Yesterday I was doing laundry, and the floor felt sticky. It turns out that the soft drink can deteriorate the aluminum it's stored in. There is /are tiny hole (s) on the bottom of several cans from which the drink was leaking. Four or five of the cans were completely empty!

Instead of quilting, I got to spend my extra time opening and spilling out a cube of soft drinks. On the plus side, another step was taken in the basement clean-out and I gained some storage space.
Posted by Shasta Matova at 12:44 PM

DANG!!!! It ate through the can??? Egads. That does NOT sound like a fun day!

I love Pepsi.My dad always told me that it would erode my gut and the aluminum in the cans would do the same for my brain. I need to go dump all my cans.I'll do it after I find my tums and remember where I hid my cubes ;)