Reading: The Future of Islam 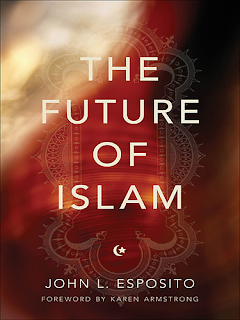 I was walking by the bookshelf at the library when this one caught my eye. The Future of Islam by John L. Esposito. I wasn't sure what it would say, and was somewhat afraid to pick it up, but the library announced that it was closed! The times had changed, and I apparently had gotten there just in time. I decided I could just get it, and return it if I didn't like it.

The reason I was afraid to pick up the book was something that Esposito discusses in the book. "Islamaphobia" is a new term that has been coined to describe it. I hadn't heard it before, but I have seen it in action.

I've had discussions with several people who ask why the Muslims don't denounce terrorists or attacks made by other Muslims.

The other day, it was cold in the office, and a coworker was wearing a scarf over her head. I told her she looked Muslim, and she was very offended. She said she didn't want to be linked to the terrorists. I must have looked at her strangely, because she did follow up with "not that all Muslims are terrorists."

Always on the news when there is an attack, they always bring up the person's religion, if it's Muslim. It was clear from the beginning that the guy at Fort Hood was a Muslim, even though we didn't know if he was shooting for religious reasons. Many people assumed he was. If the person isn't Muslim, then the religion isn't brought up unless they are acting on behalf of their religion.

News about other countries which infringe on Muslim's civil rights by banning minurets, and hijabs are concerning to me. It seems like the world always needs someone to hate. Instead of learning from our mistakes - from when we hated the Native Americans, the Jews, the Japanese, the Russians - we simply shift the hate onto another group. The scary part now is that it isn't just one country that hates the group, it iseems like it is the whole world.

The one thing that irritated me about the book is the list of questions. The preface lists questions, and at the beginning, I was like "yes I want to know the answer to that question, that one too." but eventually I decided I'd rather skip ahead to the answers than read the endless list. And then anytime he asked a question, it irked me, not because it was an endless list, but because I was sensitized to that question mark.

The book jacket has some reviews made by other people. I was surprised at how many people talked about the author being an authority, and didn't really talk about the book. He's written other books on the subject. Makes me wonder if people actually read this book, or any of his previous ones. He says he can say the same thing again and again, in each of his speeches, and books, because people are still asking him the same questions.


I did read it, and afterwards, I've kept my eye out in the media to see if positive messages of Islam are available. They are. They are everywhere. In fact, when I tried to find a photo of the book online, there were many articles labeled "The Future of Islam" by other writers that were also interesting to read. I think people just don't bother to read them, because their minds are already made up, even though they don't know the facts.

There is no way I can review all of the things that are discussed in this book. Please read it yourself. It is a great book. It explains the basic tenets of Islam, telling you about the 1.5 billion Muslims throughout the world, the good ones and the bad ones. It talks about the sticky issues of terrorism, history, politics of different countries, the challenges, reformation of Islam, etc. in a balanced way.

I got this book for free from the library. I didn't even have to review it, but I think it is worth reading.
Posted by Shasta Matova at 10:00 AM

I think what the media needs to do is make the distinction between RADICAL Islam and regular Islam. The reason people are afraid is because radical muslims have called for jihad and are actively pursuing it.
I probably won't get to this one - I have SO many books to read on my shelf!

Sounds like an interesting book! I enjoy anything having to do with religion! Thanks for doing a review! ;o) Cheers!