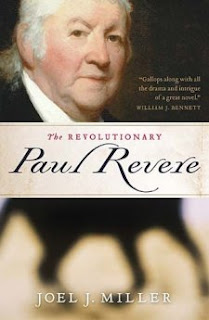 As you can probably tell from book jacket, The Revolutionary Paul Revere by Joel J. Miller is a biography of Paul Revere, the guy who lit a lantern as a signal and rode a horse through the streets yelling"The British are Coming!" I have to admit that when I was first learning about him, way back when I was a youngun, I wasn't too impressed with his doings. After all, I could do those things, even at my age, (well except for the riding the horse part, but I figured if I lived in that day, I would be able to do that part too) and I thought you had to do more impressive things to show up in the history books.

So when I saw the offer for the book, I liked that it was history, and a part that I haven't studied since way back when, but I was hoping they would have studied someone more, well, interesting.

The book is historical fact, but it is fictionalized. So the author tells you that the pen made scratching sounds as he wrote something, and how he might have felt at one time or another, based on the fact that pens do make sounds, and people generally feel a certain way when they do a certain action. It was an interesting read, and I do recommend the book. This is a wonderful way to make history come alive and be more interesting, and now I know a lot more about the Revolutionary period than I did.

The one thing it did do, and another similar book about a different time period did, is use today's values to color past events. It compared indentured servants with slaves, and I'm pretty sure that the indentured servants and apprentices in those days would have thought that it was a normal thing-that-you-do thing, even if they were worried about how well they would be treated.

Oh, and Paul is not all that boring.


Disclosure of Material Connection: I received this book free from Thomas Nelson Publishers as part of their BookSneeze.com book review bloggers program. I was not required to write a positive review. The opinions I have expressed are my own.
Posted by Shasta Matova at 10:52 AM

I LOVE history - but not textbook history! You're right, at that time you would apprentice to someone for years and be like a slave - you'd belong to them. But it was a standard way of learning a trade. I'll have to look for this book.

I will have to put this one on my list.Hope you are having an enjoyable weekend!